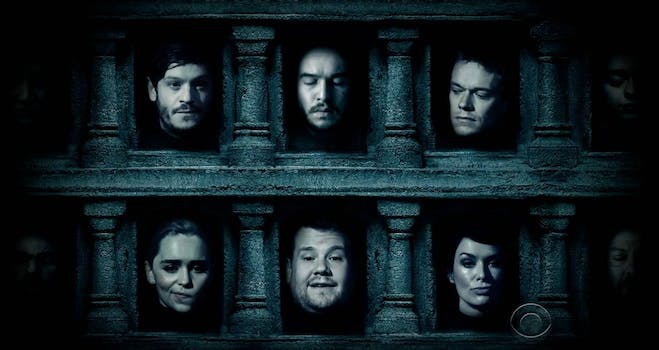 Why the long faces?

“Anyone can be killed,” Arya Stark warns us on one of the Game of Thrones posters. But nobody mentioned the inconveniences that come with becoming part of the Hall of Faces.

Once the cameras stop rolling, the Faces come out to play, and chief among them is the one belonging to James Corden, who can’t stop annoying his hallmates. Since they no longer have hands, nobody can strangle him, so Emilia Clarke, Lena Headey, Alfie Allen, and Iwan Rheon are resigned to listening to his terrible jokes and even worse games. But if you hear Theon/Reek being called Gary by Ramsay this season, you know why.

Won’t somebody please give them a pizza? None of those faces have eaten in ages, and Braavos probably serves a very decent slice.