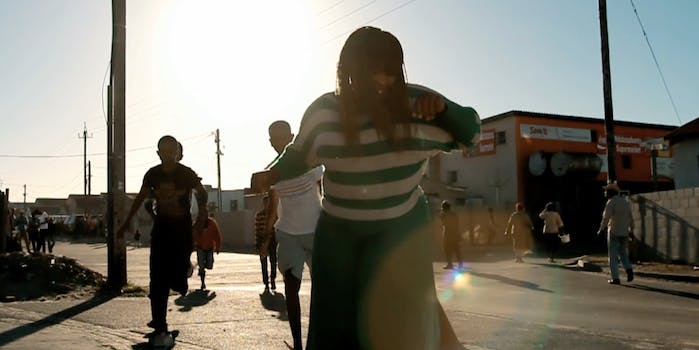 Listening to 'Future Sound of Mzansi.'

Twenty years after the end of apartheid, the systematic restriction of rights based on racial classification that characterized the country for several generations, South Africa is full of hope, despite the very real challenges it faces, and that hope translates into music. In the last decade in particular, that music has been electronic.

Nthato Mokgata, a musician better known as Spoek Mathambo, and film-maker Lebogang Rasethaba have collaborated on a film documenting what they call the “apartheid afterparty,” the blossoming of a highly spiced electronic music. It’s called Future Sound of Mzansi. And it’s fascinating.

The first thing you’ll notice, after the sweeping introductory visuals, are the subtitles. There are 11 official languages in South Africa, ranging from English and Afrikaans on the European branch of the tree to Zulu and Xhosa on the native side. Musicians in the film slide effortlessly between English and a host of African tongues, accents, and slangs like they’re flicking controls on a board.

But electronic music is the lingua franca of the film, providing a common tongue as the camera moves from local scene to local scene, from Durban to Johannesburg to Pretoria to Cape Town, touching on modern indigenous musics like gqom and kwaito and the imported musics like deep house and even European classical that combine and recombine as what Mathambo has dubbed “township tech.”

As the filmmakers move through South Africa’s cities, their cultures, and their distinctive contributions to South African EDM, they also touch—lightly, politely, but effectively and emotionally—on the stories of a couple of musicians who emblematize several of the problems of contemporary South Africa: drugs and poverty, as well as the compromised infrastructure available for mental health in the country. These sections are quietly heartbreaking but leave you more invested in the musicians as people, playing against the trope of the DJ as hero.

Toward the end (if you don’t spend all your time on Gamergate harassment and 4chan), you’ll wonder, where the hell are all the women? At least they include Yolanda, an extraordinary powerhouse of a singer from Khayelitsha, and they acknowledge that South African EDM remains too much of a “boys’ club.”

Maybe someone else will come along and document the rise of SA women into the scene.

Another regret is that the movie has few prolonged instances of the music itself. Mokgata and Rasethaba use music as background, giving filmic expression to a statement early in the film that every house in a township is a source of music, that music is a part of the everyday fabric of South Africa. Of course there is only so much time to tell the story of this music, but it’s still missed. Some of this absence is mitigated by a series of excellent Mzansi mixtapes Mathambo has been releasing on his SoundCloud page.

I don’t mention SoundCloud incidentally. The Berlin-based music sharing site, along with YouTube, Twitter, and other social media, are disproportionately responsible for spreading this future sound not just around Mzansi, but around the world.

Shangaan electro pioneer Nozinja, possibly the most distinctive artist in the film, speaks of being visited by someone from clear across the country because of the amateurish but vital videos he posted on YouTube. Since then he and his crew have toured Europe multiple times.

“As soon as Internet is absolutely free,” says rapper Okmalumkoolkat, “everybody’s getting on and everyone’s getting to know about SoundCloud, it’s gonna get stupid.”

The distinctiveness of the country’s music is due in part to the fact that each wave of music that’s come before makes its way into the contemporary sounds. In that way, the musicians of Future Sound of Mzansi are connected with both their past and with their contemporaries, others who use the syntax of EDM to translate their past into the future, like Canada’s A Tribe Called Red, Brooklyn’s Gangstagrass, New Orleans’ Gypsyphonic Disko, and Israel’s Balkan Beat Box.

But a large part of that distinctiveness remains a result of constant innovation, and what Durban’s Bra Solomon of BFG says is also “a need to just own our shit. Own what we do. Own our language. Own who we are.”

The film ends with a positive but realistic assessment of the legacy of apartheid and the history that made it possible. Music remains too segregated, the musicians say, to a degree that makes the “rainbow nation” still somewhat aspirational.

“If we brought all of our skills together,” says Felix Laband, “we would be unstoppable.”

Mathambo himself says at the film’s end, “I look forward to being one of the people working toward that, to smash down the walls between different cultures, different languages, different areas.”

Without minimizing the legacy of pain in a country not my own, I don’t think it’s too Pollyanna to say that music, like sex, has a remarkable ability to drift across political, ethnic, and social borders.

The beat wants what it wants.

Future Sound of Mzansi is out this week on DVD.

Update 12:44pm CT, May 21: Part 1 of Future Sound of Mzansi is streamable on YouTube here.

Screengrab via Future Sound of Mzansi