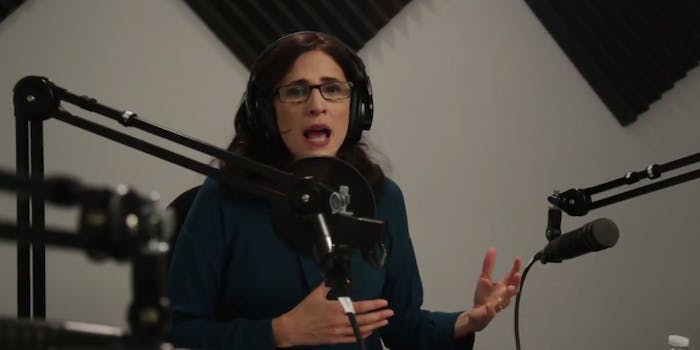 We can't wait for the finale, either.

As Serial fans while away the endless hours until Thursday morning’s release of the season one finale, Funny or Die has released an anticipatory parody that sums up all the anguish, high hopes, and obsessive-compulsive detail mining that the series has induced.

The sketch, featuring Michaela Watkins doing a spot-on impression of Sarah Koenig, heightens the frenzy of the nail-biting quest for answers by featuring Sarah in-studio, haplessly fumbling for a final episode narrative.

She gets a call from Adnan, who, in classically glib Adnan-style casually asks, “So, like, who did it?” She desperately texts Jay, but to no avail, as his phone is with someone else. And finally, feeling the heat from a visit from Mail Chimp ad executives, who, fittingly, cannot pronounce the name of their own company, Sarah confesses that she, herself, is the murderer.

The final scene is audio-only of Sarah calling Adnan from prison. The exchange dissolves into a hilarious back-and-forth of “no you go” and “no, I understand” utterances that is sure to tickle fans of the podcast.

We may not get any definite answers tomorrow morning, but, as this sharp little parody reminds us, at least we had some fun along the way.