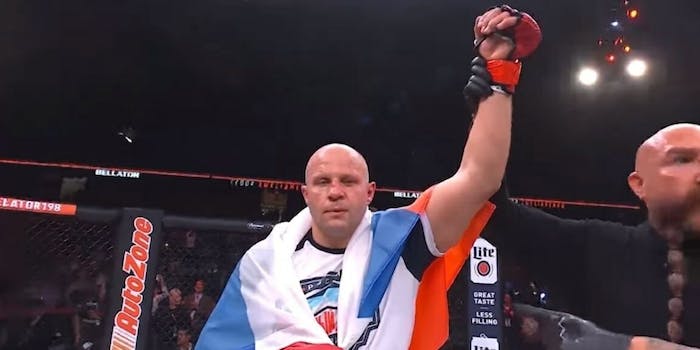 'They were very nice, very professional.'

One of the best mixed martial art fighters of this century was questioned by the FBI this week for his possible connections with President Donald Trump and Russian President Vladimir Putin.

Fedor Emelianenko, a Russian-born MMA fighter who dominated the MMA’s heavyweight division in the first decade of this century, was tracked down at his hotel by the FBI in Illinois as he prepared for a fight, his manager told the Associated Press.

“The FBI came to the hotel looking to talk to Fedor and they were very nice, came in to speak with Fedor for a few minutes, spoke to me, very cool guys, and that’s all I can really say about it. Again, the FBI did come to the hotel, they found us, knocked on the door,” Jerry Millen, Emelianenko’s manager, said. “Hundred percent, kind of surprised. They were very nice, very professional.”

More from the AP:

Putin has attended Emelianenko’s fights, and the 41-year-old fighter has been photographed with the Russian president. His connection with Trump dates back to 2008, when he was signed by Affliction Entertainment, a fight league in which Trump had an ownership stake. Trump announced a joint venture involving MMA and Emelianenko at a news conference on June 5, 2008.

The Affliction league was run by Trump’s lawyer, Michael Cohen, who was raided by the FBI himself this month and is under investigation.

Emelianenko won his fight against Frank Mir on Saturday by first-round knockout.