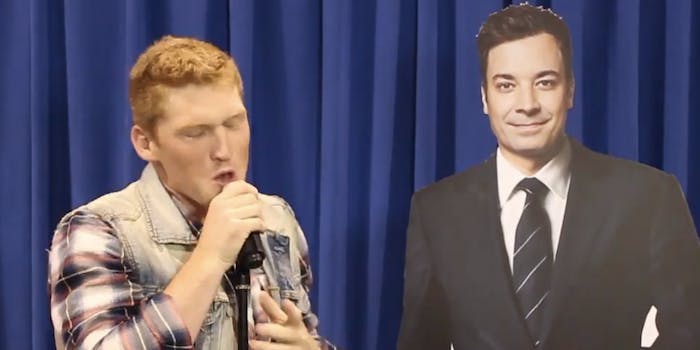 Jimmy Fallon just shared the supercut of his lip-synch booth

Emma Stone has nothing on these VidCon attendees.

Emma Stone has nothing on these VidCon attendees.

One of the highlights of VidCon last month was The Tonight Show Starring Jimmy Fallon‘s addictive lip-synch booth where fans could try their hand at one of the show’s biggest viral hits. The lip synch battle has seen the likes of Emma Stone, John Krasinski, Joseph Gordon-Levitt, and Paul Rudd absolutely dominating host Fallon on the air and then raking in the Web hits for the show in the days to follow. In Anaheim, conventiongoers and YouTube celebrities alike could try their hand in the booth, and the result was this Fallon Web exclusive including Iggy Azalea’s “Fancy,” Katy Perry’s “Teenage Dream,” and more.

Eagle-eyed YouTube fans will spot some of their favorites like Mamrie Hart and the Emma Approved crew, but don’t worry if you don’t recognize everyone. All the YouTube-famous participants are credited at the end, so you can follow your new favorite syncher on their own channel. Fallon may not always win his lip synch battles, but he’s definitely winning YouTube.