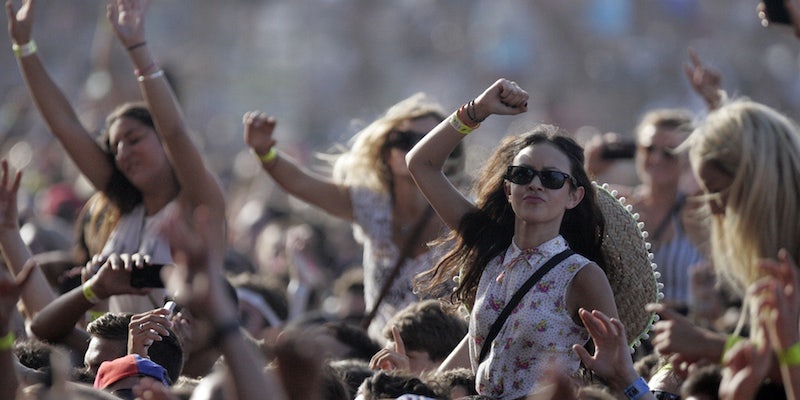 Photo Via Eva Rinaldi/Flickr (CC BY 2.0)

You could soon go to a festival without leaving your couch

Festivals at the office are in our future.

SXSW is over, but there’s an Austin-based startup that doesn’t think that should mean the end of your festivities. To give people access to festivals— from the biggest to the most niche—the startup Everfest has launched a site, backed by $1.5 million in an angel funding round led by Benchmark Capital founder Bob Kagle. Other investors included tech and non-tech angels from Austin through ATX Seed Ventures.

In addition to being a social community for dedicated festival-goers, Everfest will serve as a festival-centric video hub. “The vast majority of content featured is video, both before, during, and after the festival happens,” says Paul Cross, founder of Everfest. Videos on the site will be either user-created or official content shot and released by the festivals. Which means you can expect everything from concert streams (of varying sizes and quality) to videos of panels and speeches.

“Each page will be a living video of this movement from both the festival and the festival attendee,” says Cross, who adds that this is a top category worldwide in terms of video content.

Looking ahead, Everfest is focused on building out its product nationwide, and will begin “international localization” in the third quarter—in essence, wherever there’s a fest, it wants to be there in case you are not.

Everfest, the site, lets you search for festivals by area, date, and category (from “music” to “unique”). You can check it out here.

Photo via Eva Rinaldi/Flickr (CC BY 2.0)