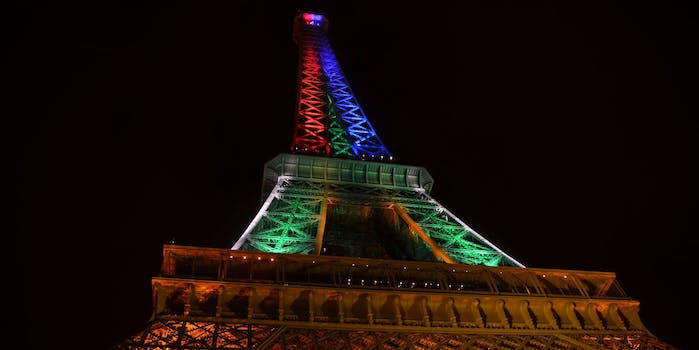 This is a good goal.

With the Euro 2016 soccer tournament set to kick off June 10 in an event that features 24 squads battling against each other for the next month, social-media users can have at least some affect on the results. Oh, not on the games themselves, but—and this is almost as cool—on what colors will be displayed nightly on the Eiffel Tower.

Cell phone carrier Orange, one of the official sponsors of Euro 2016, will use Facebook, Twitter, and Instagram to determine which team’s fans are the most active on social media. Once the decision is made—when it’s determined which nation has earned the most hashtag mentions that day—the Eiffel Tower will be lit up in that squad’s colors after the end of the day’s final game.

Here’s how Quartz explains the process:

“If, say, France and England have a match that day, fans of either side can start furiously expressing their support on social media, appending hashtags recommended by UEFA, European football’s governing body. These social media posts are tallied up from one minute past midnight on match day until 9:30pm that evening. The team with the most social media support gets its national colors projected onto the Eiffel Tower until midnight.”

It sounds like the people in charge of actually determining the winning country will be busy. That’s because 672 million tweets were sent out during the course of the 2014 World Cup. That tournament, of course, involves the entire world, and since Euro 2016 is contained to only one continent, it’s unlikely Twitter will receive that much action from this event.

But millions and millions of tweets will be sent per day, and there will be plenty of hashtags attached within those social-media messages. All in an effort to make one of the prettiest landmarks in the world even more attractive for a few hours per day.