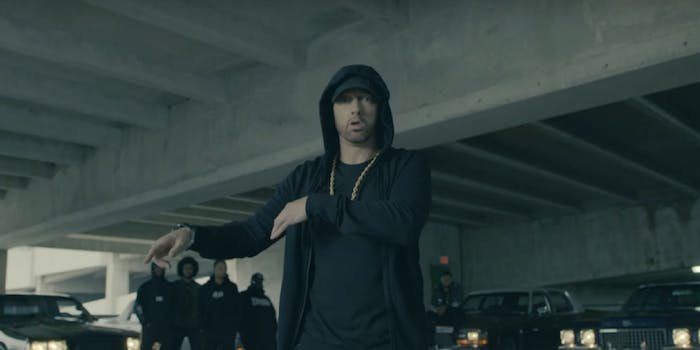 The National Party didn't think this one through.

Lose yourself and win a lawsuit.

Eminem has emerged victorious and his publishing company awarded $600,000 ($415,000 USD) after a judge ruled that New Zealand’s National Party used his track “Lose Yourself” in campaign ads without permission.

The lawsuit was filed in 2014, when the National Party used the song in ads for candidate Steven Joyce. A spokesperson for Eminem said at the time, “It is both disappointing and sadly ironic that the political party responsible for championing the rights of music publishers in New Zealand by the introduction of the three strikes copyright reforms should itself have so little regard for copyright.”

The National Party defended the track, which was unfortunately titled “Eminem Esque,” saying it originated with Australian producers. The hearing, which took place in May, even made it to Last Week Tonight, where John Oliver detailed the ridiculousness of a courtroom seriously analyzing the lyrics to “Lose Yourself.”

But Justice Helen Cull called the Eminem track a “highly original work,” citing “the guitar riff, the timbre, the strong hypnotic rhythm, and the recurring violin instrumentation and the piano figure.” She ruled that the National Party track “substantially” copied “Lose Yourself.”