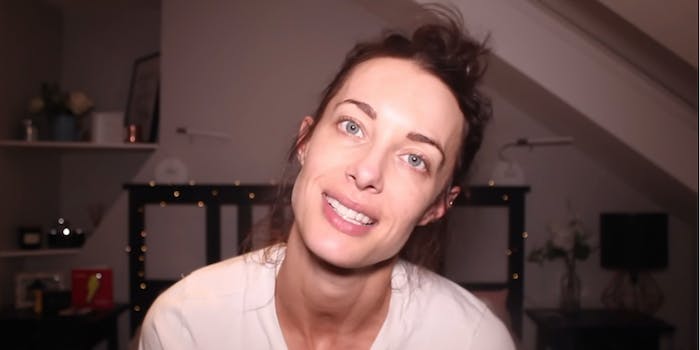 'She has touched so many lives it's hard to imagine things without her.'

British YouTube personality Emily Hartridge died after a collision between her electric scooter and a truck in London on July 12.

The 35-year-old was reportedly pronounced dead at the scene, according to a statement from the Metropolitan Police. The statement also asks for any information about the crash, as no one has been arrested yet.

A statement was posted to her Instagram account on July 13, confirming that she had passed. “She has touched so many lives it’s hard to imagine things without her,” it read. Hartridge covered sex, identity, relationships, and mental health on her YouTube channel, and was well-known for her 10 Reasons Why… series.

According to the Guardian, the scene of the crash “was redesigned in 2015 to keep cyclists separated from other traffic. The new layout has been criticised as being confusing and last year a cyclist died after being hit by a bin lorry.” It is illegal to ride electric scooters on public roads in the U.K., though their surge in popularity has urged lawmakers to reconsider how that’s enforced. In a video posted July 8, Hartridge’s boyfriend Jake Hazell gifts her two electric scooters. She had previously posted about wanting to start a family with Hazell, and detailed her experience with freezing her eggs.

He posted a video on Monday about Hartridge’s death.

On social media, friends and fans mourned the loss.

Yesterday my whole road was blocked off with police tape due to a road incident, I walked past the scene and thought hope the person’s ok… turns out the person wasn’t okay. My friend is dead and now I feel completely sick. Rest in peace Emily hartridge, I’m in fucking bits. pic.twitter.com/M8Ep2GJs36

We're deeply saddened to learn about the tragic loss of a truly talented British creator, Emily Hartridge. Our thoughts and condolences go out to all of her loved ones and fans.