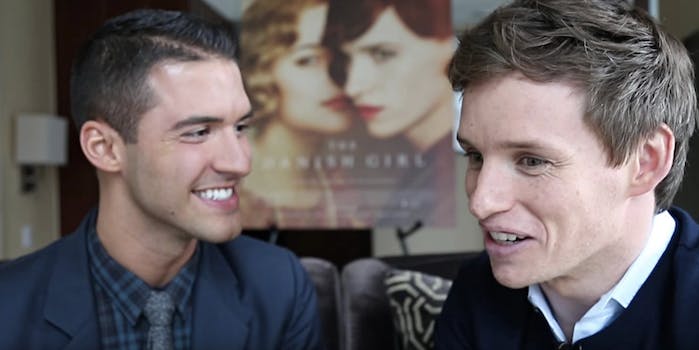 The Academy Award winner teamed up with YouTuber Raymond Braun.

He may have an Oscar to his name, but Eddie Redmayne can now add “YouTube collaborator” to his long list of accomplishments.

Redmayne took to YouTube as part of the promotion for his upcoming film The Danish Girl, in which he plays Lili Elbe, one of the first known participants in a sex reassignment surgery. He joined Raymond Braun, a former Google employee who’s become an LGBT YouTuber in his own right, documenting LGBT issues on the platform.

Redmayne previously cited transgender coming-out stories on YouTube as part of his inspiration for the role, including transgender Harry Potter activist Jackson Bird. It’s an additional level of connection, as Redmayne is also slated to join the Potter universe as the lead in Fantastic Beasts and Where to Find Them. Redmayne further clarified in this collab that he’d found Bird during preparation for the Potter project and took the inspiration to The Danish Girl.

Braun also collaborated with other people from The Danish Girl, including director Tom Hooper and co-star Alicia Vikander. Braun points out that many of his viewers are young, and what would Redmayne offer to those of them who feel alone and like they don’t fit in.

“I think the notion of fitting in is so annoying,” said Redmayne. “Don’t fit in; be yourself. Be different.”

“I would say take Lili’s lead,” he continued. “Have the courage to try. You’ve only got one shot at life.”