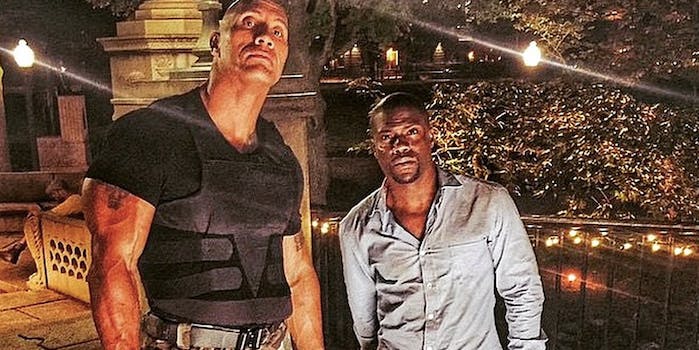 Dwayne ‘The Rock’ Johnson pranks the world with a broken finger

Nobody is tougher than Dwayne “The Rock” Johnson. Nobody. So it doesn’t seem so out of the ordinary when you see him smiling through an injury as dopey as a dislocated finger. “Oh, hey, I’m The Rock, and here is my mutilated finger. No big.” Sure, I’d buy it.

Well, that’s precisely what the gigantic wrestler-turned-actor revealed on Instagram today on the set of his new film Central Intelligence, confirming through graphic imagery what his 20 million followers already knew: The Rock is a total badass.

When my partner in grind @kevinhart4real shows up on our #CentralIntelligence set and tells me it's his birthday, I respond in the most sweet, loving and unicorn t-shirt wearing way I know how… F*ck your birthday. #BrotherlyLove #HappyBirthdayRockstar #UnicornsAndMiddleFingers

They’re the Laurel and Hardy of the 21st century.

H/T Complex | Photo via The Rock/Instagram