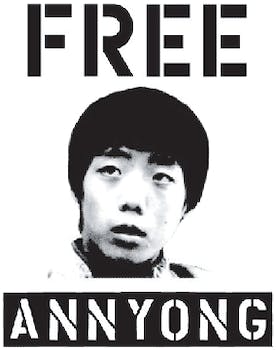 Dot Dot Dot: Annyong on Twitter, Anonymous in “Time”, Hillary in texts, and a cardboard arcade

When people can connect online, dreams can come true.

Ed Fear wanted to expand his technical skills. He’s a fan of cult-classic TV show Arrested Development in which an adopted Korean boy is addressed as “Annyong.” (His white, adoptive parents mistakenly believe the Korean word for “hello” is his name.) The boy, Annyong, understanding it as “hello,” responds to anyone addressing him with “Annyong.” Comedy ensues.

Fear extended the joke and created a bot that would tweet “Annyong,” back to anyone else tweeting the word. Fear said he felt bad for essentially trolling people, but people actually seem to like it. There are now a bunch of Koreans, unfamiliar with the TV show, who think there’s some unknown tweeter simply wishing them a good day.

That’s a funny thing about the Internet. The first thing any programmer learns to say is “hello world.” Now that we have the Internet, the world says “hello” back. At least if you’re Korean.

Time’s online poll seeking suggestions for the most influential person of the year closed Monday. Reddit’s general manager Erik Martin jumped to an early lead, but in the end Anonymous pulled it out for a stunning, last-minute victory.

Was it hacked? Who can say, but Anonymous was involved…

To be fair, Martin didn’t want to win. He suggested that the rest of us vote for Iranian auteur Asghar Farhadi, director of the Academy Award-winning film, A Separation.

Who is ultimately named Time’s “Person of the Year” is up to Time’s editors. If Anonymous is, however, it’ll be the latest installment in a trend that is a sign of our times. In 2003, the “Person of the Year” was the American soldier. In 2006, it was “you,” and in 2011, it was the protester. If Anonymous is ratified, then I suppose it will be no one. Or everyone. Someone, certainly.

And why not? Anonymous is now a major de facto watchdog group, bringing the pain to any legislator who would dare touch our Internet. Most recently, it’s the Cyber Intelligence Sharing and Protection Act (CISPA) they’ve got in their sights. Right alongside Google. Nothing like Congress to make some strange bedfellows: the world’s largest repository of personal information and the hacktivist collective dedicated to undermining any centralized authority—particularly those that try to control information.

And Anonymous’s official selection would mean that for the fourth time in less than a decade Time will have named a non-person its “Person of the Year.” In the more than two decades prior, there were just 2.

One of them, significantly, was the computer.

Speaking of strange bedfellows, isn’t it the capacity of the Internet to bring people together that we love about it?

H&M has a new campaign encouraging you to showcase your best kiss. H&M is pretty blatantly ripping off Pinterest. People are brought together, but online it’s through clones and references that are shattered, remixed, and reassembled into a pastiche of human and cultural forms in an effect that is almost a kind of meta cubism. It’s all for a good cause, though.

But, just as important as the ability of the Internet to bring together lovers is its ability to bring together, well, much stranger bedfellows.
A new meme—and Tumblr—Texts from Hillary was born on just April 4. It brought joy to the world. Or at least me, anyway. We were there for its inception, its rise, and ultimately its demise. It was around just a week, but it garnered 83,000 Facebook shares.

What happened? Well, the secretary of state herself posted a meme. At that moment, glorious as it had been, there was nothing more to be done. It was the apotheosis of the form.

Lovers come together online. The powerful and the powerless. But I dare your heart not to be warmed by this one: A 9-year-old boy spent his summer building an arcade out of cardboard in his dad’s auto parts shop. Sadly, of course, there were no customers for the cardboard arcade. Until, a filmmaker wandered in looking for a door handle to his ‘96 Toyota Corolla. He was the first person ever to buy a “fun pass.” He posted it on Reddit, and on one sunny day in October, more than 100 people flashmobbed the cardboard arcade.

If it hadn’t actually happened, I wouldn’t have believed it. It was like something out of a movie. And now, of course, there is a YouTube movie about it.

In a way, the happy ending is that the filmmaker started a college scholarship fund for the boy, which has already raised $30,000.
But none of that—the circular, self-referential cultural significance; the more practical gift of tuition—compares to the immediate, visceral experience of seeing the expression of pure joy that crossed that boy’s face. Ahmedzeeshan on YouTube said it best: “Man Tears have been shed.”

What a life began the day the Internet turned a bunch of discarded boxes and a boy’s imagination into an IRL dream world.