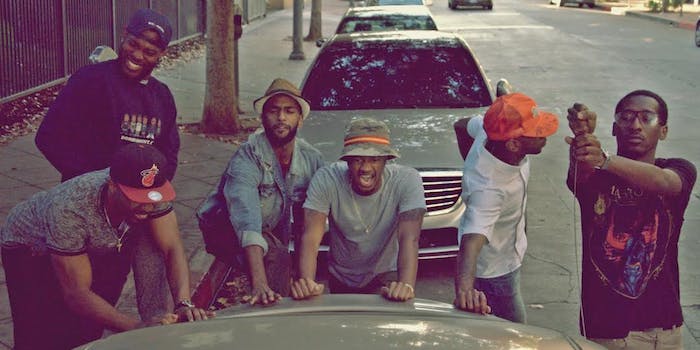 In the back seat with Dormtainment’s Comedy Central webseries, ‘Six Guys One Car’

There are a lot of things that are awful about Los Angeles: the traffic, the sky-high rents, the constant risk of misreading a parking sign and having your car towed. It’s a wonder anyone chooses to move here in the first place. But the next time you’re cursing out another driver who’s just cut you off on the on-ramp, think of Dormtainment’s misadventures and be thankful you’re not the seventh member of their group.

In collaboration with Comedy Central, comedy troupe Dormtainment just released its latest webseries, Six Guys One Car, a three-part series in which everything that can go wrong after a comedy show does.

“We have had the opportunity to work with Comedy Central for about two years now, passing ideas back and forth,” states Dormtainment—made up of members Chaz Miller, Cameron Miller, Amanuel Richards, Jerome “Rome” Green, Mike Anthony, and Daunte “Tay” Dier. “They heard the idea for this webseries and liked it the most and gave us the chance to write and star in it. They have been really easy to work with, great team.”

Dormtainment originally started making comedy videos for YouTube in 2009, and the group has since grown its brand to include live comedy shows, comedy albums, merchandise, and traditional media collaborations. While a collaboration with Comedy Central is a huge accomplishment for the group, it’s a smart move on the network’s part as well, tapping into the troupe’s already passionate 777,000 subscribers.

While Dormtainment’s characters in the series are obviously embellished, the underlying relationships and camaraderie of the group are very true to life. The six guys share three bedrooms and one car in Los Angeles, it doesn’t get more real than that.

“These are definitely enhanced versions of us all,” laughs the group. “Everybody took some of their personality and bumped it up times a hundred. Except for Chaz, he always has to regular poop.”

And if that doesn’t give you a preview of what’s in store, we’re not sure what will. Let the binge-watching begin!