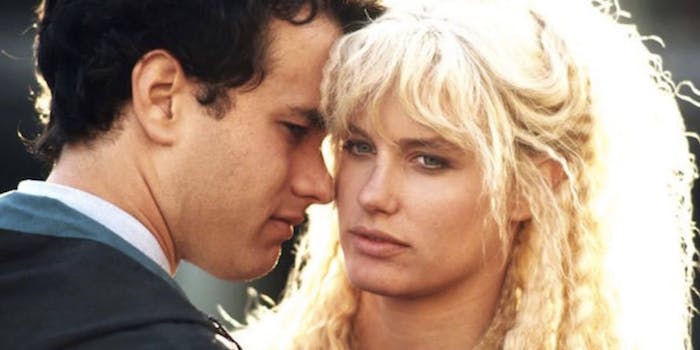 Disney+ edited ‘Splash’ to cover butts, and we are scarred for life

'Mermaids have hairy butts, pass it on.'

Disney+ is leaving some older fans scratching their heads after watching a version of the 1984 mermaid film Splash only to discover some baffling CGI intended to draw attention away from butts.

If you’ve never seen Splash, first of all, hurry on over to Disney+ and rectify that ASAP. Second of all, Splash is a well-loved film that sees Tom Hanks falling in love with Daryl Hannah, who he fails to realize is a mermaid who previously saved him from drowning. It’s a cute little rom-com that falls on the tame end of the spectrum for adults. It was originally rated PG upon its release back in the 80s (before the PG-13 rating existed).

Now, not only has Disney upped the rating to PG-13, but they’ve also edited the film for content literally decades after the fact. It appears to be an attempt to make it more suitable for children.

In the original film, there are several instances where Hannah—who, again, plays a mermaid, a creature that would not logically wear clothing coming in and out of the ocean—faces away from the camera with not much covering her rear. The scenes are not sexualized or filmed in a gratuitous fashion. They simply exist in a way that makes sense for her character.

But someone at Disney was apparently terrified that a heinous hiney shot would corrupt the minds of young children and ordered the use of what appears to be digital fur technology to lengthen Hannah’s hair to cover her rump. In doing so, they simply scarred all the grown adults watching, instead.

The decision isn’t all that surprising considering Disney+ has quickly gained a reputation for being overly cautious about having “adult” content on its platform. (The term hasn’t been well-clarified by the mouse, but on several occasions, has looked suspiciously like not wanting to have LGBTQ characters.) But it’s still really jarring to see a laughably bad addition to such a beloved classic film.

Some fans are confused as to why this particular harmless shot was edited when other films on Disney+ contain similar content, lending credence to the idea that this is a double standard for dude butts vs lady butts.

Unfortunately, this isn’t the only moment in Splash that’s edited, with at least two additional fledgling bits of nudity receiving similar noticeably bad treatment. It also isn’t the only movie on Disney+ that’s been changed for the platform.

As easy as it is to make jokes about whatever monstrosity Disney+ has created on an iconic actress’ bum for no good reason, it’s ultimately pretty frustrating, both in terms of taking fans out of the movie-watching experience, and what it represents.

It’s also a great reminder to keep buying physical media, because you never know what streaming services might alter in the future.

Just imagine—every movie you love could one day be filled with hairy butts. Nobody wants that. Absolutely nobody.