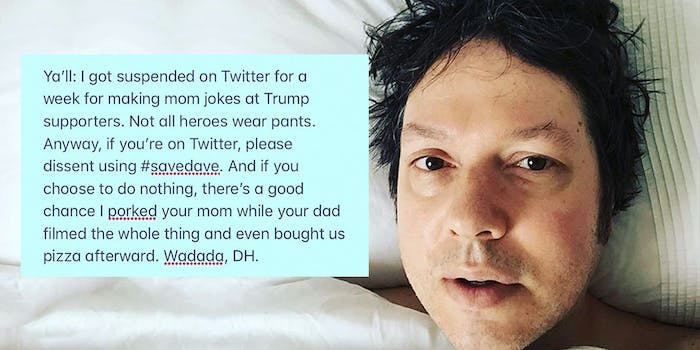 The suspension has given Hill a lot of time to think about your mom.

Comedian/musician/podcaster Dave Hill has been suspended from Twitter for telling Donald Trump supporters he had sex with their moms (and sometimes their dads, too).

In a Facebook post from Dec. 1, Hill claimed that after a month of replying to Trump supporters who harassed him and sometimes threatened violence by stating he had or would have sex with their mothers, he was finally suspended. He wrote:

Was it worth it? Sure. Am I a hero? Probably. But the important thing to remember here is that we all have a job in the #resistance. For some, it’s speaking out against injustice. For others, it’s getting people registered to vote. And for more than 30 days straight in the fall of 2018, mine was telling Trump supporters I porked their moms, sometimes in the butt and often with their husbands filming and buying us pizza afterward. I guess my point is there will be casualties along the way, but don’t ever give up the fight.

Well, it took some doing, but after more than a month straight of mom jokes directed at Trump supporters replying to me…

Hill, who has appeared on Unbreakable Kimmy Schmidt and performs in the black metal band Witch Taint, can’t tweet until Dec. 8, but his Twitter account is still live. However, it appears that many of his “Your mom” tweets are now gone.

In a statement, Hill explained that “Twitter asked me to remove some and I just went ahead and got rid of all them as a preemptive strike. I guess it’s kind of like how Tibetan monks make those beautiful sand mandalas and then completely destroy them afterward.”

Hill did state that he would continue this important work on other platforms. And the hashtag #SaveDave has started circulating, with friends and allies pointing out the ridiculousness of Hill being suspended when there are actual white supremacists on Twitter. Others are picking up the slack while he’s in Twitter jail.

Guys, one thing that brings me joy in these dark times is @mrdavehill’s “Your mom” (& your dad) jokes, but some goober reported him & he’s suspended for a week. Why is the punishment for being a hilarious idiot swifter & harsher than for being a Nazi here? #SaveDave

Don't the snowflakes who got @MrDaveHill's account suspended realize that they've only compounded their issues by creating more free time for him to pork their respective moms? #3DChess #SaveDave

My friend @mrdavehill was suspended from twitter for saying he porked the moms of some Trump supporters harassing him. This is not a crime. If porking a conservative's mom were a crime, Dave would've gone to jail long ago. #SaveDave

Ah, it appears there is at least one ray of light in this dim world.