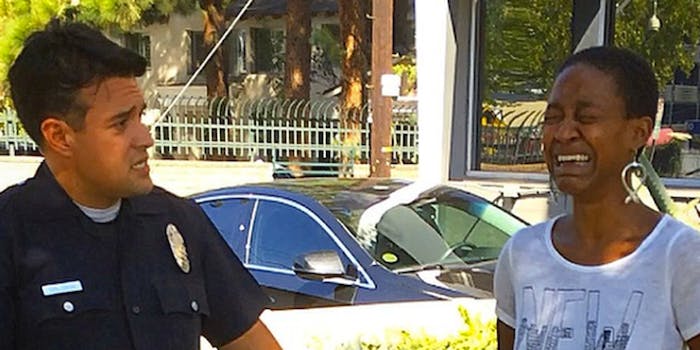 Watts says she did nothing wrong.

On Thursday, actress Daniele Watts was briefly handcuffed and detained by two Studio City police officers, after kissing her husband, Brian James Lucas, in the front seat of their car.

Watts, who starred in Django Unchained and Weeds, posted about the incident on Facebook Thursday night, and alleged that officers “accosted me and forced me into handcuffs.” Police had reportedly received a call about lewd activity, and asked Watts if she actually knew her husband, who is white. The couple believes they were insinuating she might be a prostitute.

According to BuzzFeed, Watts claimed the officers asked for ID from both, but Watts refused, saying she didn’t have to provide it and didn’t do anything wrong. She was on the phone with her father when more officers pulled up:

So then I’m still talking to my dad,” Watts said, “and a squad car pulls up and shouts at me, ‘put your hands on the wall.” Watts complied, and the police handcuffed her, loaded her in the back of the car and drove her back to the initial scene. Watts said she suffers from panic attacks from past trauma, and she started hyperventilating.

On Facebook, she also wrote about her family’s history with racial profiling:

As I was sitting in the back of the police car, I remembered the countless times my father came home frustrated or humiliated by the cops when he had done nothing wrong. I felt his shame, his anger, and my own feelings of frustration for existing in a world where I have allowed myself to believe that “authority figures” could control my BEING… my ability to BE!!!!!!!

I was sitting in that back of this cop car, filled with adrenaline, my wrist bleeding in pain, and it occurred to me, that even there, I STILL HAD POWER OVER MY OWN SPIRIT.

Her husband provided her ID and the two were eventually released, but Watts’s wrist was apparently cut by the handcuffs. Last month in Beverly Hills, just before the Emmys, film producer Charles Belk was mistaken for a bank robbery suspect and detained for six hours.

The LAPD allegedly doesn’t have a record of the incident, and claims Watts was never brought in or charged.