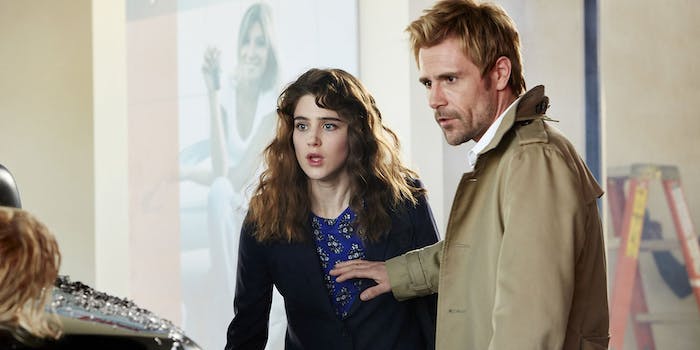 ‘Constantine’ series heads to NBC, CW picks up ‘The Flash’

But will the disconnect between DC's movies and TV series alienate fans?

Along with Batman backstory reboot Gotham, DC/Warner Brothers have two other comicbook adaptations in the works: Constantine and The Flash. On Thursday, both shows were officially commissioned for a full series.

The Flash will air on the CW as a spinoff to Arrow (now in its second season), while Constantine will be joining NBC’s Fall schedule. The Flash is by far the most traditional superhero show in the new crop of live-action DC Comics shows, with the first few teaser images showing the title character in a slightly updated version of his iconic red costume.

The Flash will star 24-year-old Grant Gustin, previously known for his role as Kurt Hummel’s erstwhile love interest Sebastian Smythe in Glee. Combine this casting with the show’s presence on the CW, and it’s safe to assume that The Flash will be aimed at a teen audience, much like Smallville. It also kicks off with a classic example of the superhero origin story genre: a young forensic investigator being caught in a chemical explosion after lightning strikes his lab.

Out of DC’s three upcoming TV series, Constantine looks like it has the most potential to do something interesting. Gotham’s first trailer suggests that it will tread familiar ground in the Batman mythos, while The Flash will be making an effort to introduce a superhero who has never found a mainstream audience before now.

Constantine, on the other hand, is an adaptation of a comic from DC’s adult-rated Vertigo imprint (home to titles like Sandman, Swamp Thing and V for Vendetta), and could wind up being anything from a cheesy supernatural detective show to a true noir drama that reflects the smirking pessimism of the original Hellblazer comics. All we know for sure is that it’s already trying to distance itself from the 2005 Constantine movie, which alienated Hellblazer fans by casting Keanu Reeves as an American reimagining of the blond, English occult detective protagonist, and Shia LaBeouf as his irritating sidekick.

Constantine’s pilot episode was directed by Neil Marshall (The Descent, Game of Thrones) and written by David S. Goyer, who previously worked on numerous superhero adaptations including Christopher Nolan’s Dark Knight trilogy, the Blade movies, and Man of Steel. With people like this at the helm, it would’ve been downright embarrassing if the pilot didn’t get picked up for a full season. However, this does mean that the stakes are a little higher for Constantine than for something like The Flash.

The only downside here is that for audiences who have spent the past few years being inundated by Marvel Studios movies, the lack of cohesiveness among these new TV shows may be a little confusing.

Although DC/Warner Bros. are ramping up their plans to launch multiple new TV and movie franchises over the next few years, most of these adaptations won’t exist in the same universe. So while Gotham’s young Bruce Wayne is growing up in what appears to be the present day, Ben Affleck will be playing a completely unconnected version of Bruce Wayne in the Man of Steel sequel. Similarly, if Warner Bros. decide to include the Flash in their upcoming Justice League movie, it will probably be a different Flash from the one we see on the CW. Also, Gotham, The Flash and Constantine will all be set in different universes, for the obvious reason that they’re airing on different networks.

Compared to Marvel Studios’ plans for four interconnected Netflix shows that tie into the same storylines as the Avengers movies, this not only seems confusing from a storytelling perspective, but is kind of clumsy marketing.

With multiple TV shows and movies set in the same universe, Marvel viewers are encouraged to watch everything—hence how Agents of S.H.I.E.L.D. instantly had an audience, despite mostly starring a cast of unknown actors playing brand new characters. The lack of crossover potential between DC’s upcoming movies and TV series means that each one will be playing to an isolated audience, except for the relatively small number of core DC Comics fans who will watch everything no matter what.

Essentially, Marvel Studios are treating their cinematic universe just like their comics universe, making sure that minor characters and big-name stars are all somehow connected to the same overarching storylines. Meanwhile the DC/Warner Bros. model of selling separate titles to different TV networks will keep fans happy on a short term basis, but will do nothing to progress their extended universe past the type of comicbook adaptation we’ve been seeing for decades.