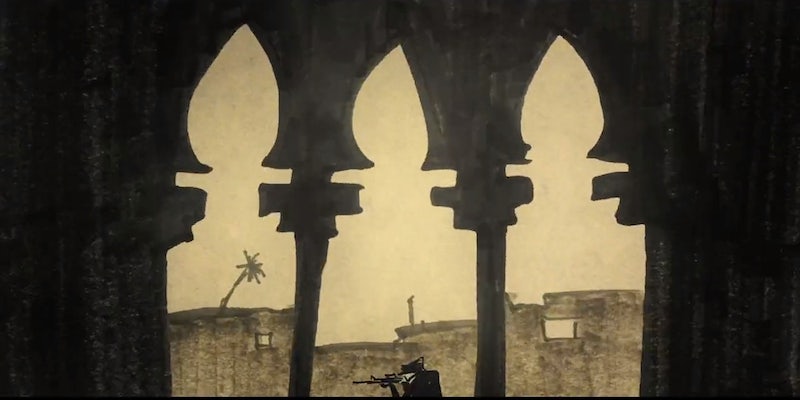 "Veterans nod at us after screenings."

Forget American Sniper. This hand-drawn animated short may be the year’s ultimate statement on the war in Iraq and Afghanistan.

In 2012, animation production company Ornana promised backers on Kickstarter that its next work would explore “the spectrum of haze experienced by soldiers in the desert.”

It’s an interpretation of what happens when top training encounters circumstances beyond the realm of human control, in both interior and exterior conflicts. the story is on the ground and under the helmet of a 19 year-old infantryman.

Two-hundred-plus audience members believed in the vision of the studio which previously brought the world the marvelous (Notes on) Biology. But it took some time to launch the final product, which took two years for animator Danny Madden to create. The animation process primarily used black markers on recycled paper, drawn frame by painstaking frame.

This week, the Internet can finally see the results. Confusion Through Sand made its television debut on PBS this week, airing on Vimeo the following day. Producer Jim Cummings told Filmmaker magazine that the secret to gaining PBS distribution was a combination of luck and “a real lack of guilt” about repeated exposure.

In this case, the persistence paid off for everyone: Confusion in the Sand is a stunning and immersive sepia-toned short film that may disturb plenty of viewers but has the stamp of authenticity all over it. Speaking to Reddit r/videos users about audience reaction to the film, Cummings said, “veterans nod at us after screenings which is a really [assuring] feeling.”

It’s no wonder Vimeo named this their Short of the Week. What did you think?