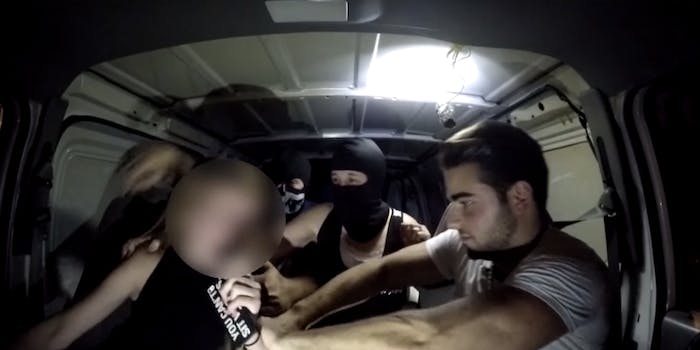 Does this 'Dangers of Social Media' video go too far?

New viral video “The Dangers of Social Media” purports to show how easy it is for a pedophile to pick up an underage girl using social media. However the video also underscores the flawed nature of YouTube’s “social experiment” trend, even when a creator believes he or she has the best of intentions.

In the clip, prankster Coby Persin decides to conduct a “social experiment” in which he poses as a teen boy on Facebook, connects with three pre-selected girls, and attempts to get them to meet up with him in person. The girls featured in the video do meet Persin—and are confronted by their angry parents at the last minute. In the final confrontation, a young girl enters a car with Persin, and he grabs the girl’s arm while she screams and her parents, disguised in ski masks, clutch her from behind.

“It really teaches you a lesson,” Persin, who has 1.1 million subscribers, told the Daily Dot. “I get shivers when I watch it because I feel like I was there… even though I was there!”

Persin said he was inspired by a video he watched of a 27-year-old man who attempted to abduct a girl he met online from her home. He was thwarted by her father, who subsequently beat him up on camera. That video has since been deleted from YouTube.

Persin is far from the first person to document potentially illegal online interactions between teens and adults, although he’s flipped the script: Most pose as the teen themselves and attempt to catch adults engaging in illegal activity. The practice was made most famous by To Catch a Predator, which functioned under legal supervision and ended when a suspected pedophile committed suicide mid-sting. Dark Justice, two 20-something U.K. residents who pose as teens online to expose pedophiles, are cautious to never start conversations themselves lest they entrap one of their targets.

“Once you start to engage in deceit of some sort, presenting yourself as 14-year-old girls, even if you’re not soliciting somebody, that’s getting tricky. You’re getting into the issue of ‘is there some entrapment going on there,’” David Finkelhor, a professor at the Crimes Against Children Research Center at the University of New Hampshire told The Kernel. Law enforcement officers are expected to understand those rules, but vigilante YouTubers might not.

Persin said he’s not concerned about any legal ramifications, since he obtained parental consent to contact each girl in the video and did not discuss anything sexual with the young women. The parents in the video all responded to an ad Persin posted on Craigslist asking for people with daughters between the ages of 11 and 15.

“I posted a generic ad on Craigslist for parents who knew their teens were on Facebook,” he said. “I just said ‘PSA’; I didn’t give anything away.”

After texting with six different parents and eliminating three who weren’t responding quickly enough, Persin settled on his three featured families. Each family was compensated for their participation in the video, although Persin declined to say how much.

The video only focuses on the young girls, who are predominantly scolded by their fathers after they are caught attempting to meet up with the strange boy. Persin said he only solicited women for this particular video, but he promised a follow-up next week that’s already in production featuring young boys.

Meanwhile the original video skyrocketed to more than 10 million views in a single day, and Persin expects it to be his most successful video ever.

Persin’s no stranger to a viral success. According to Persin, all of his videos in the last year are viral ones. Currently his third most popular video is one filmed last year that pitted two homeless men in New York against each other in arm wrestling. The winner was supposed to win $100, but before Persin could reveal the twist that the loser also won money, the winning man shared his money with the loser himself.

His most popular video, with 32 million views, is of a woman who walks around New York pants-less, only covered in paint meant to look like pants. Videos like these are supposed to fall somewhere along the scale of shocking to heartwarming, and have been called out by those in the YouTube community as exploitative, devised solely to drive up traffic numbers.  While some such videos might have been created with only the best intentions, social experiment videos also often ridicule women, LGBTQ+ people, and racial minorities.

The “Child Predator Social Experiment” video fails to address the fact that only 25 percent of female victims of rape or sexual assault were victimized by strangers, according to 2010 U.S. Dept of Justice study. In essence, these girls are more likely to be assaulted by a family friend or classmate they already know than someone who targets them on the Internet. However, 1 in 25 youths receive sexual solicitations online that do include suggested offline contact, according to a paper in American Psychologist.

Persin said none of the parents believed their daughters would respond, but at least in his limited sample, it wasn’t difficult to encourage these young girls to meet in person with someone they only know on the Internet. (It shouldn’t come as a surprise: Children and teens are told not to talk to strangers on the Internet—but then at age 18, they’re told the best way to meet someone to date is probably going to be an app like Tinder, where they’ll meet a stranger for dinner or, perhaps, simply for a somewhat anonymous sexual encounter.)

Persin said he hopes people walk away from his video aware about the realities of teen actions (which, although unadvised, were in this case wholly legal).

Persin is not currently affiliated with any advocacy group or teen Internet safety initiative. The video’s success has inspired him to change the format of his channel away from pranks and toward social experiment programming. It’s a far cry from Persin’s original intent in joining YouTube a little over a year ago.

“It was just to get my name better out there,” he explained. “I was doing acting, waiting in line doing castings. Now I actually have casting directors call me directly. [YouTube] is a platform; it’s a game-changer.”