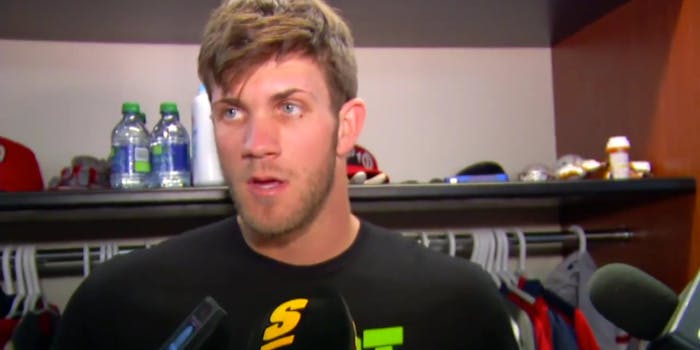 After MLB pitcher Bryce Harper's deadpan response to an interviewer went viral, it was only a matter of time before this happened.

Following a recent win over the Toronto Blue Jays, a Canadian journalist asked the Washington Nationals’ 19-year old phenom Bryce Harper if he planned to celebrate his victory with a beer, taking advantage of Ontario’s drinking age which is 19. The Mormon first baseman responded with what’s become the first great meme of the 2012 baseball season:

A day after the interview went viral, YouTube user BHARPFACTS created a supercut of Harper giving his now-legendary response to dozens of famous inquisitors from pop culture and politics.

Over the course of three minutes, Harper tells the likes of Travis Bickle, Jessica Simpson, and David from David After Dentist that their grand inquiries are nothing more than clown questions, bro.

“That’s a clown question, bro” has already inspired a popular Twitter hashtag, a T-shirt, and numerous posts on the rhetorical genius of Harper’s withering response. If we’re lucky, we’ll see President Obama use the phrase at least once before this election season is through.