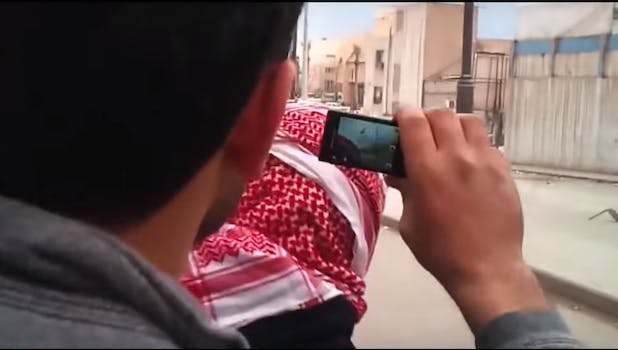 ‘City of Ghosts’ profiles the Syrian heroes who trolled ISIS

The Amazon documentary is a snapshot of courage in the face of monstrous tyranny.

With all the attention Aleppo has gotten in the past few years, it can be easy to forget there are other parts of Syria that have been devastated just as badly. In the documentary City of Ghosts, streaming now on Amazon Prime, director Matthew Heineman seeks to remind us of exactly that.

The city referred to in the title is Raqqa, which has been in the news recently following the removal of ISIS (or ISIL) by the U.S.-backed Syrian Democratic Forces. Although this battle may have ended in victory over the Islamic State, Raqqa has already been irrevocably damaged. Early reports indicate that as much as 50 percent of the city lies in ruin. But even before that, Raqqa had been fundamentally altered by ISIS’ occupation, which forced its residents to live under constant fear of terror and violence. This is the Raqqa City of Ghosts depicts.

At the beginning of Heineman’s film, the Arab Spring has begun to sweep across the Middle East. Anger at the regime of President Bashar al-Assad forced thousands to take to the streets in protest, and the conflict eventually erupted into the still-ongoing Syrian Civil War. In addition to spurring on the world’s current refugee crisis, one major effect of the war was the rise of ISIS. With the recent destabilization of the region, cities like Raqqa became an easy target for the Islamic State, which was rapidly amassing power and followers in places which had become short on leadership. Along the way, one group of brave young men were there to document it all. Although they initially set out to film a revolution, they beared witness to the many horrors ISIS was inflicting on the city. This heroic group of citizen journalists banded together to form RBSS, or “Raqqa is Being Slaughtered Silently.”

City of Ghosts tracks the trajectory of RBSS from its inception in Syria, to the myriad of threats and atrocities which eventually forced key members to flee to Turkey and Germany. It mostly focuses on spokesperson Aziz, reporter Mohamad, and cameraman Hamoud, but many other members of RBSS appear throughout the film as well. While the leadership of this organization has since left, there are also Skype interviews here with members who were on the ground in Syria at the time of filming.

In case there was any question as to why that’s so remarkable, ISIS declared RBSS an enemy of the caliphate almost immediately after its videos exposing the terrorist group’s actions went public. Post-ISIS takeover in 2009, Raqqa became a dangerous place for everyone. But it became a dangerous place for RBSS specifically, as ISIS began hunting its members, and sending death threats. Even after its leadership fled to other countries, key members of RBSS continued to be pursued and harassed online by the Islamic State.

Just because they got away doesn’t mean their escape didn’t come at a high price. Only two weeks after launching their web presence, a friend of the activists named Moutaz was detained at a checkpoint and tortured. When they found ties to RBSS on his computer, they executed him and released the video. Beloved Syrian filmmaker and journalist Naji Jerf, RBSS’s mentor and “Uncle,” was gunned down in Turkey, prompting the members who were stationed there to move on to Berlin.

Few in the film suffer as much as Hamoud. After ISIS offered a reward for his assassination or information leading to his capture, terrorists abducted his father and forced him to denounce Hamoud in a video. They also recorded his father’s execution. Hamoud’s brother, Hassan, was lucky enough to get out with him. Their brother Ahmed was not so fortunate, and was also executed by ISIS. Even though it makes him so angry that blood comes out of his mouth, Hamoud says he watches the video of his father’s execution a lot because it gives him strength. Trying to reconcile that strength with a moment at the beginning of the film, when a photographer tells him to “smile” at an awards ceremony, is almost unthinkable. How does one keep on fighting, much less “smile” and act like a functioning human being after something like that? 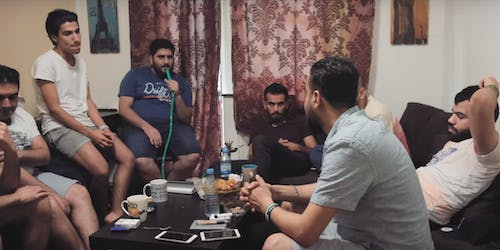 Somehow the members of RBSS profiled here find time in their lives for levity. Among the best moments in the film are the ones of them just joking around like friends do, or of Mohamad laughing with his wife, smiling at her on the train. You would think that following their arrival in Germany, the lives of these men and their families would at least settle into some normalcy. Yet even after he returns from the U.S., where RBSS received the International Press Freedom Award, Aziz comes home to more death threats from ISIS. To add insult to injury, there are the angry, right-wing protesters in Germany to contend with, determined to have refugees shipped out.

The sheer weight of all this is preposterous. A powerful scene at the end of the film finds Aziz shaking, passing out, succumbing to the PTSD anyone could suffer after enduring so much.

City of Ghosts is being talked about as a likely Oscar contender for best documentary, riding a wave of buzz which first started when it premiered at the Sundance Film Festival. But as the film itself attests to, awards mean little compared to social impact. As history progresses and the Syrian Civil War is dissected and taught in schools, the portrait City of God paints of these activists will prove to be a key snapshot of courage in the face of monstrous tyranny.