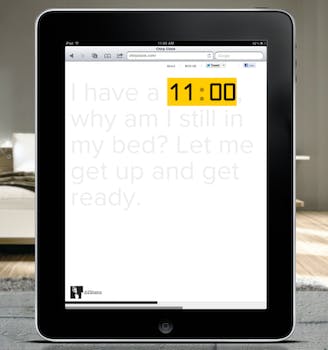 What time is it? Check the Chirp Clock

Who needs a watch when Twitter tells you the time?

Every second, about 600 tweets are sent out around the world. And while most people would like to think their messages are unique, a new website proves otherwise.

Chirp Clock is a tool from designer Mike Bodge that searches Twitter every 10 seconds for tweets that include the current time—in the user’s local time zone, so you’ll see different tweets depending on where you are.

The search routinely finds several tweets to display; each one appears fleetingly on the screen for two seconds while an abstract clock ticks away on the bottom of the page.

“I randomly thought one night that since there are so many users, it must be possible that people are always talking about the time,” Bodge told the Daily Dot. “Sure enough, people were. A lot of people!”

The experiment illustrates how ephemeral some Twitter messages can be, Bodge said: “Tweets matter in real time, and almost get stale the moment after they’re sent.”

So far Bodge has seen people tweeting about going to class and a flood of messages around 9 am from people complaining about going to work. He’s also seen Muslims using the service to announce when they are praying.

“I think it speaks to the ecosystem of the site,” Bodge said. “There are the automated transit tweets that keeps us informed, but there’s also stupid tweets from people that are just bored. I think that covers what Twitter is really: It’s a useful tool and it’s good to waste time on.”

The clock has been a hit on Tumblr, collecting more than 200 Tumblr notes and 50 tweets in less than an hour.