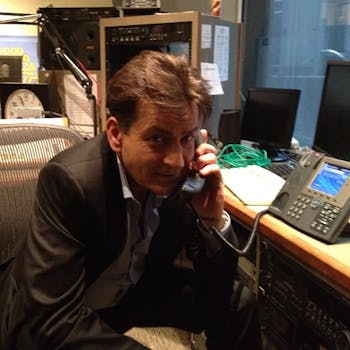 Less than a month after everyone's favorite #winning actor quit Twitter, he's back.

Charlie Sheen’s fans might be #winning again after all.

Almost one month to the day after the outspoken star of Anger Management quit Twitter, he followed in the steps of former Miami Dolphins wide receiver Chad Johnson and baseball player Jose Canseco and returned to the social networking site today.

Sheen originally quit last month after claiming that he’d had enough of the site, but now he’s giving it a second chance.

But if you were looking for more #tigerblood or #winning antics from Sheen, you might be disappointed.

Sheen returned to tweeting without fuss and seems to be keeping his Twitter professional for now. His first tweet since returning to his followers is a promotion for his TV show.

“It’s on! My pop guest stars Thursday on Anger Management. Watch my dad show up as my dad 9:30p on FX. Best yet!!” Sheen wrote along with posting a behind-the-scenes photo of him and his father, Martin.

Sheen reactivated his Twitter because he missed being able to communicate directly with fans, according to TMZ.

“He misses interacting with his fans … and really wants to talk to them about important things in his life,” a source close to Sheen told TMZ.

Only time will tell what else Sheen has up his sleeve.