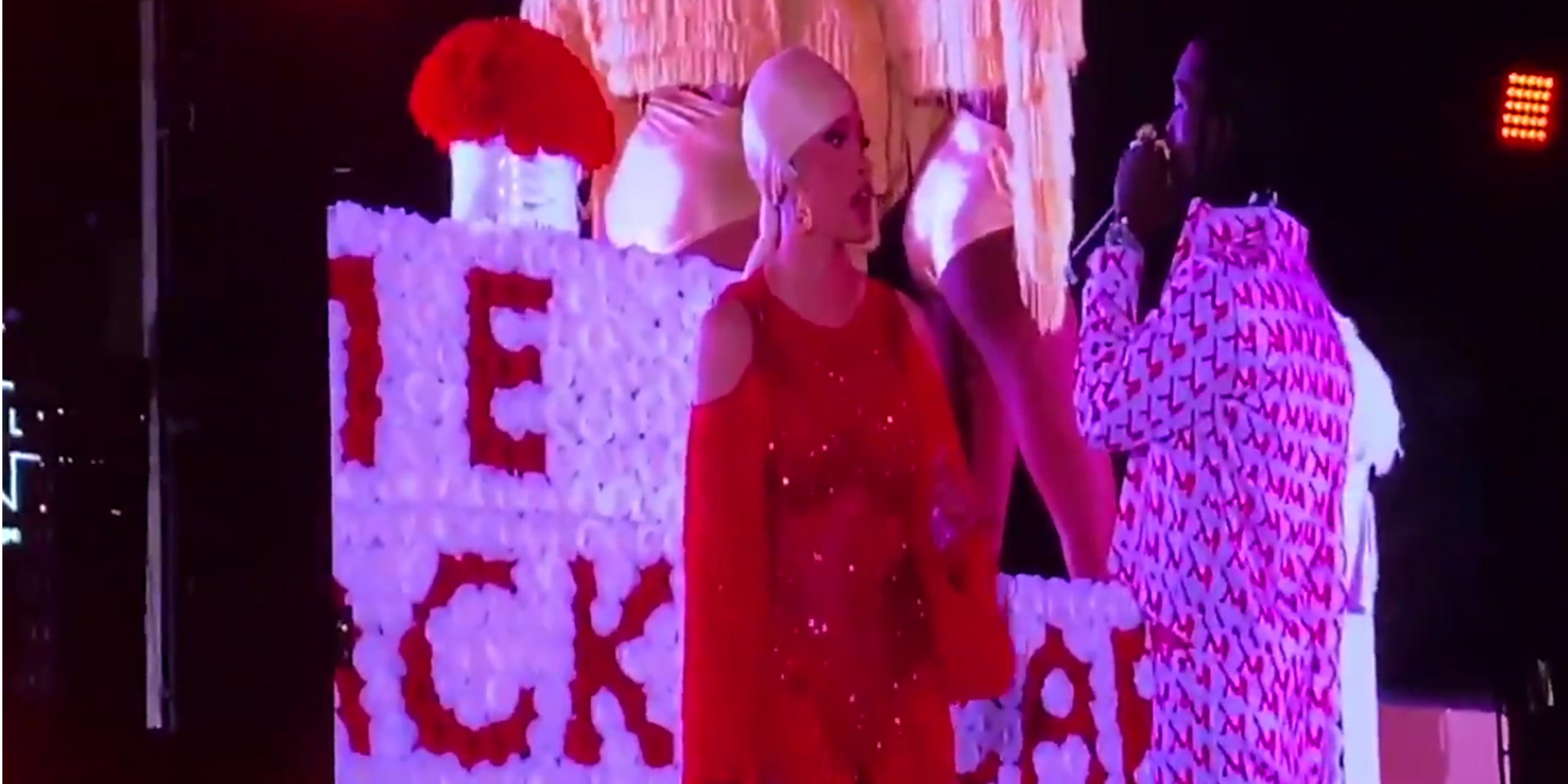 The estranged husband of Cardi B, Kiari Cephus—better known as Offset—interrupted her set at Saturday’s Rolling Loud Festival in Los Angeles to ask her to take him back. Though many speculated that the interruption was staged, fans were not amused.

The Migos rapper waltzed onto the stage during Cardi B‘s performance with flowers and a cake, along with a huge written request to “Take me back Cardi.” Cardi, the headliner Saturday night, paused her performance to exchange words with her ex before he was ushered offstage.

Cardi announced her separation from Offset on Instagram earlier this month, after just over a year of marriage.

“Don’t take him back,” one fan can be heard yelling in a video. “Once a cheater always a cheater!”

People on Twitter seemed to agree, with many condemning Offset for choosing to confront Cardi while she was working.

“Offset disrupting Cardi’s performance is like your ex running up on. [sic] you at your job in the middle of a meeting. This is not acceptable or cute. Or romantic. It’s creepy and unstable,” one user wrote.

Offset disrupting Cardi's performance is like your ex running up on. you at your job in the middle of a meeting. This is not acceptable or cute. Or romantic. It's creepy and unstable.

Some people theorized that the entire encounter was staged, while others were convinced that Offset’s “romantic” gesture was genuine.

“I think this is staged,” one Twitter user wrote. “Could be wrong, but it feels very very fake. Idk. IF it’s not staged, this isn’t cute or endearing at all. He’s borderline stalking her. Interrupting her while she works? No.”

This is getting out of hand. He’s interrupting her work now https://t.co/YMV1ncYvM9

“This video makes me uncomfortable af,” one user wrote. “Offset should of take the hint and stop apologizing to Cardi. At this point Cardi don’t wanna hear his apologies. Offset need to lay low for a while and think about what he has done. Nothing working at this point.”

This video makes me uncomfortable af. Offset should of take the hint and stop apologizing to Cardi. At this point Cardi dont wanna hear his apologies. Offset need to lay low for a while and think about what he has done. Nothing working at this point.

Though opinions were split on the authenticity of the gesture, most everyone agreed that Cardi handled the situation with grace and poise.

Everyone talking about Offset wilding out. But what stands out to me is how graceful Cardi has been. She announced the breakup but she’s not talking shit about him (though she has every right to), and maintains respect for him as her child’s father while doing her own thing.

Cardi B responded to Offset’s critics on two Instagram posts early Sunday morning. “Violating my baby’s father is not gonna make me feel any better,” she said, asking her fans to lay off the rapper.

It’s uncertain if Offset was genuinely trying to win back Cardi’s affections or just trying to drum up some drama, but one thing is certain—everyone is talking about these two today.