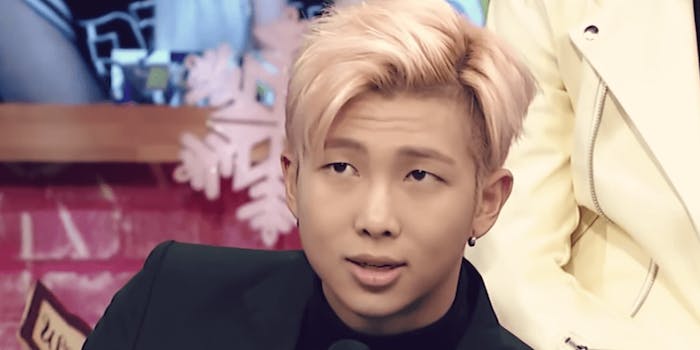 One fan vowed to find them all.

BTS member Kim Nam-joon, know to his fans as RM, revealed during a recent live stream that he has gone through more than 30 pairs of AirPods.

While doing a Q&A over the weekend, the rapper responded to a commenter who said they’d lost their AirPods by noting that he had lost countless pairs of his own.

RM said he believed that he has lost around 33 pairs in total, currently putting him on his 34th pair.

K-pop fans reacted in astonishment at the staggering number.

Someone shared they lost their airpods, and RM clapped, saying there's someone he can become good friends with. He thinks he's on his THIRTY FOURTH (!!!) PAIR OF AIRPODS NOW, and that when he logs into his bluetooth he's able to mourn over all his old ones.

someone told namjoon they were sad about losing their airpods and he said he was on his 34th or so pair of airpods now …… 34th …. pic.twitter.com/sRIq8JMejF

One fan even calculated that RM has probably spent well over $6,000 on AirPods alone.

Others questioned where exactly all those AirPods went, while some vowed to find each and every last pair.

“What if he realizes all of his airpods are just under his couch or smth,” Twitter user @BTSBEINGBTSYT wrote.

i finally have an aim in my life. its to find all 33 airpods namjoon lost.

Of course, remarks were also made about the star’s wealth given that he has been willing to dish out so much on a product that he will inevitably lose.

I've never even touched an AirPod in my entire life, but Joon has already accomplished losing 33 pairs, incredible#BTSwins10s @BTS_twt pic.twitter.com/dilSfgenRj

But no internet story would be complete without memes. Fans of RM envisioned the singer having to go to the Apple store over and over again.

joon ordering another one pair from apple store cuz he lost the airpod just seconds agopic.twitter.com/iLIKiOv9nH

Me trynna figure out why Joon doesn’t just hire me as his personal AirPod keeper instead of having to buy a new pair every 2 days pic.twitter.com/FGCl3vEzcB

The internet doesn’t always react positively when it comes to AirPod-inspired displays of wealth.

Celebrity Chrissy Teigen drew criticism last month after stating her mother likewise went through numerous pairs of AirPods and treated them as if they were “disposable.”

The subject often leads to controversy given the environmental impact AirPods have as well.

But accidentally losing your AirPods isn’t the worst thing that can happen. Some users have reportedly misplaced their wireless earbuds by swallowing them. In one case, however, a man claimed he was eventually able to retrieve his undigested pair.

But not everyone swallows their AirPods on accident. Earlier this year, YouTubers began swallowing their AirPods in a desperate attempt to gain viral stardom.