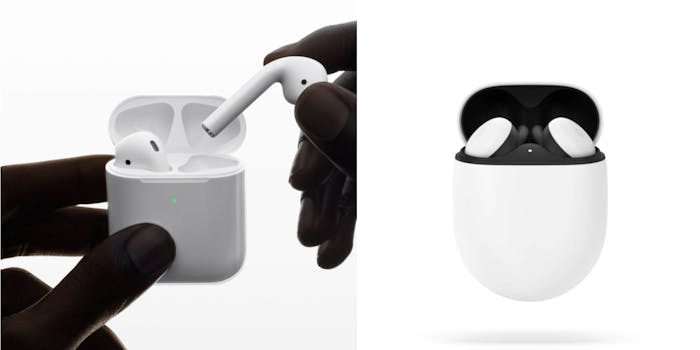 Pixel Buds 2 or Apple AirPods 2: Which are right for you?

To AirPod or not to AirPod? That is the question.

With the large market of wireless Bluetooth earbuds, it can be difficult to choose a pair that meets your needs. If you’ve already committed to one of the two major mobile ecosystems (Google or Apple), there are two clear choices for  2019: the Pixel Buds 2 ($179) or Apple AirPods 2 ($159).

The Pixel Buds and AirPods have one glaring difference which may influence your choice to purchase; the new AirPods are available for purchase now, while the Pixel Buds 2 will not be available until next year.

If you’re willing to wait, there are significant differences between the two. Here’s a handy breakdown to figuring out which are right for you.

The two brands of earphones have comparable price points. Pixel Buds 2 are only $20 more expensive than Apple AirPods 2, at $179 and $159 respectively.

Battery life for Pixel Buds 2 is also nearly identical to that of AirPods: five hours for the buds themselves and 24 for their charging case. The case is also compatible with wireless charging, just like (you guessed it) AirPods 2.

As far as battery life, the AirPods themselves will each hold a five-hour charge, and the case 24 hours. According to Apple, only 15 minutes of charging will yield three hours of battery life, for those in a rush.

The new H1 chip powering the AirPods 2 means that they will connect even faster to your devices, maintain a stronger connection, and allow for double the amount of talk time, according to imore.com. This also allows for faster switching between devices.

Then there’s the new AirPod’s audio sharing feature, which allows the same song to be broadcast to two sets of AirPods at once so you don’t have to share your AirPod to share a song.

Google has taken care to include ambient sound in the design of Pixel Buds 2, which have a small channel that allows a bit of environmental sound to sneak through. Because of this, the Pixel Buds 2 will only be semi-effective as far as noise-canceling goes.

Speaking of sound, we won’t know anything about the sound quality of Pixel Buds 2 until they are released in 2020. Full specs haven’t been released by Google yet either, but the Verge reports that the general fit of the Pixel Buds 2 is fairly comfortable and the actual earbuds are smaller and lighter than the first generation.

The Pixel Buds 2 case is slightly larger than an AirPods case, and has a soft-touch matte exterior compared to the other’s glossy finish. The buds themselves come in orange, white, mint, and black, according to Cnet.

The second-generation AirPods come with a few new flashy features, but ultimately look the same as their predecessor. The indicator light is no longer inside the charging case, but on the front, and it is capable of wireless charging (if you’re into that sort of thing).

The automatic pause-and-play feature is still going strong in the AirPods 2. However, it now has “Hey Siri” functionality, allowing you to access the digital assistant without taking your iPhone out of your pocket or lifting your wrist to activate your Apple Watch.

Realistically, the decision to purchase either depends on how long you’re willing to wait to buy, how much you’re willing to pay, whether case size actually matters, and which ecosystem of devices you find yourself in (or are in the process of making a decision about buying into). For Apple users eyeing the Pixel Buds 2 with interest, they will be able to connect with your devices, but any Google-specific functionality (Google Translate, for example) will not be usable. The sound quality of Pixel Buds 2 isn’t available at all, but Airpods 2 sound quality has been reported as just “eh,” according to Mashable.