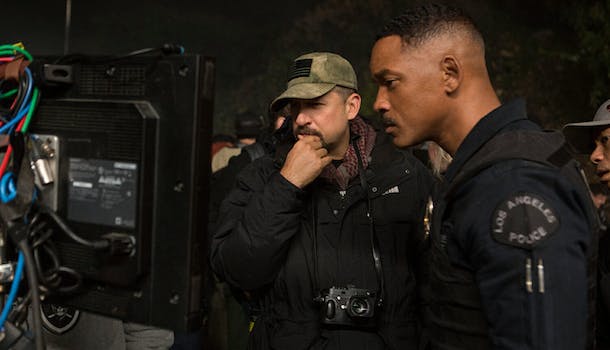 The movie, though, does deserve credit for originality.

Bright is a curious miscalculation by Netflix. Not altogether unwatchable, the film suffers from a hodgepodge of disparate sensibilities and styles.

Bright is the brainchild of wunderkind screenwriter Max Landis and hyper-masculine action director David Ayer. Set in a reality where mystical creatures, including elves and orcs, live alongside humans, the film stars Will Smith as LAPD officer Daryl Ward, a veteran cop who’s been partnered with rookie Nick Jakoby (Joel Edgerton)—the department’s first orc recruit. When they discover a magic wand in the possession of an elf named Tikka (Lucy Fry), Ward and Jakoby are forced to protect the wand from the many nefarious factions going after it while trying to keep Tikka safe, too.

In this world, everyone wants the power that comes with a wand, but only a “Bright,” a person born with magical abilities, can control one.

It’s an utterly silly, completely ridiculous premise, seemingly born out of algorithm-generated, genre-hybrid logic. One can almost hear Netflix executives reading back the data analytics: “People like fantasy, and cop movies, and Will Smith. If we put them in a movie together we can’t lose!” Again, though, this type of thinking is also why Bright ends up a messy mix of conflicting ingredients.

Landis has spent much of his career writing similarly high concept, genre-melding mashups. Some of these have worked well, like the found-footage, high school superhero movie Chronicle. Others, like the viewpoint-shifting origin story Victor Frankenstein have fared less successfully.

Ayer has spent most of his career writing and directing action-packed thrillers, usually set in law enforcement, such as Training Day, the original Fast and Furious, End of Watch, and Fury. Recently, however, his aesthetic has shifted to the Hot Topic-ready, steampunk-meets-urban-fairytale vibe of Bright and last year’s Suicide Squad. Landis and Ayer are both artists with strong perspectives, but they’re far from a match made in heaven.

Then there’s Will Smith. Despite an impressive roster of supporting actors, including Noomi Rapace, Edgar Ramirez, Ike Barinholtz, Jay Hernandez, and Margaret Cho, Smith absolutely devours every scene he’s in—and not in a good way. Bright is a Will Smith vehicle which was never meant to be a Will Smith vehicle. As in Suicide Squad, Smith’s previous collaboration with Ayer, his Will Smithness distracts from the larger story he’s trying to serve.

Smith is a great actor, but he needs to be front and center. In Suicide Squad, he was fighting his co-stars for the audience’s attention; here he’s fighting the premise. Although Smith and Edgerton have some good scenes together, this isn’t the fun, buddy dynamic of a Men in Black. This is Will Smith in one lane, and everyone else in another.

Despite the awkward blend created by the distinct voices of its writer, director, and star, Bright deserves some small amount of credit for originality. Genre hybrids can be enjoyable in the right hands, but disastrous in the wrong ones. Although this is far from Landis’ best work, the elevator pitch of The Lord of the Rings set in the present day is intriguing on its face. Yet Landis never strikes the right balance between mystery and setup.

If Bright were a TV show, the teasing of information we get here might make for a suitable pilot. And if it does end up being the first installment in a series, it’s possible the sequels will do a better job of exploring this world. Landis makes certain elements of the mythology clear, such as how elves are at the top of the food chain, humans represent most of the middle class, and orcs remain at the bottom of the social and economic hierarchy. Other details (fairies aren’t a separate race, they’re pests?) are murkier. Rote dialog and boring character details also spoil a lot of the fun. The dynamic between Ward and his wife and daughter, for instance, telegraphs what we’re supposed to feel in the most transparent, screenwriterly way.

Bright’s biggest saving grace is Edgerton, who’s rather lovable, even heartbreaking as Jakoby, despite working under pounds of prosthetics which impair his speech (it’s unclear whether his muddled accent is intentional or not.) Battling prejudice on the force and accusations of betrayal from his own people, Jakoby is an orc stuck between a rock and a hard place. Like most trailblazers, he’s not beloved in his time, but his struggle is real and resonant and makes him the most human character of the movie.

This also opens the door to a new layer of criticism, however. Parts of Bright’s allegory work, but in 2017, when underrepresented groups should be able to tell their own stories without cloaking them in the disguise of genre, allegory starts to be less important.

Netflix unveiled the first trailer for Bright way back in February, during the Oscars. At the time, they were clearly pushing the novel idea of a “streaming blockbuster.” The question on everyone’s lips, or which the massive content provider at least wanted to be on everyone’s lips, was could Netflix produce, promote, and release a high-concept, studio-level event movie, capable of generating the same amount of buzz as a traditional blockbuster. Bright was never going to be the next Avengers, but with a budget of almost $100 million, you can bet Netflix saw a potential franchise in the future.

And perhaps Bright will get a sequel. Taking into account how stingy Netflix usually is when it comes to releasing streaming numbers, it’s almost impossible to say at this point how popular the movie has actually been with subscribers. But given the whiff of indifference which it has mostly been met with in the media and by critics, it’s safe to say this isn’t the significant step forward Netflix wanted it to be.

The more interesting question, rather than whether Bright is particularly good or not, may be if Netflix needs it at this point anyway. In a year which has seen it release festival disruptors, both failed and legitimate Oscar contenders, a pair of excellent horror movies, and an ever-expanding catalogue of buzzworthy documentaries, it hardly has any room left for a big budget franchise-starter. This is an ongoing issue with Netflix’s “flood the market” strategy. When you’re constantly getting new content, it becomes harder to tell the “special” releases from the regular ones. Not to mention that when Netflix provides so many solid options for users to discover on their own, the ones being half-heartedly shoved down our throats start to feel all the more unnecessary.