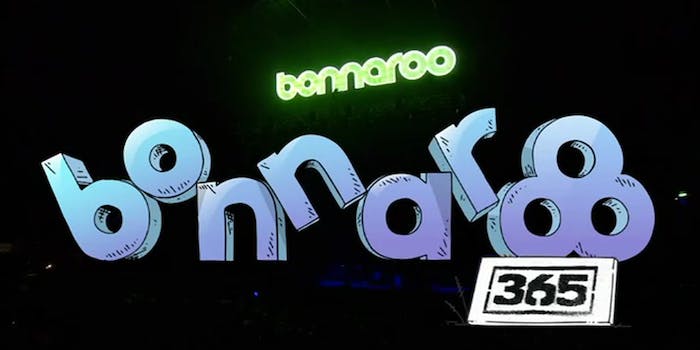 There's no longer any need to wait for June to see this music festival. On YouTube, it'll be posting new music 365 days a year.

You don’t have to travel to middle-of-nowhere, Tenn. to take in Bonnaroo anymore. The music festival launched its own YouTube channel on Wednesday.

Appropriately titled “Bonnaroo365,” the channel features original shows, band interviews, and most importantly, archival footage of performances from previous Bonnaroo festivals. The channel will be updated year-round unlike other music festival channels, which are mothballed after the event is over. Just look at how sad Coachella’s channel is now!

The first original show on the channel is #BonnarooGethard, where comedian and failed sitcom star Chris Gethard treks from Los Angeles to Manchester, Tenn. without any money. He’s relying on your help to get him there. Gethard will be live-tweeting his journey and hoping people email him at [email protected] with rides, food, and clean clothes.

As for the music, the channel features a lot of different genres for your fickle tastes. Check out Grace Potter and the Nocturnals singing “Paris” from 2011, two performances from Georgia jam band, Widespread Panic, and a live, 2008 version of “Thrash Unreal” by Against Me!, whose leader Tom Gabel came out this week as transgender.

A 2011 performance from My Morning Jacket, clocking in at over an hour, will only be available until May 15. We’re always thinking of our readers, so we’ve embedded it below: