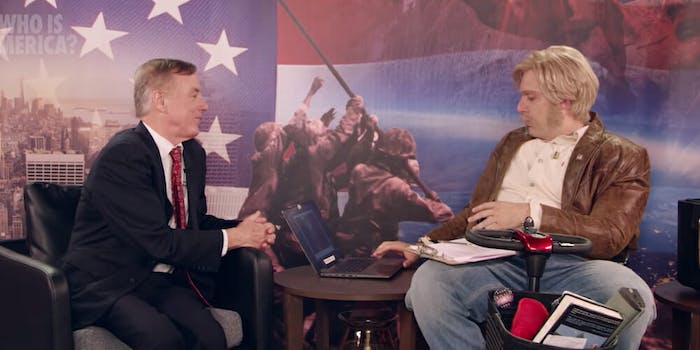 Showtime / Who Is America?

What they believe is already a joke.

Conspiracy theorists are funny, but also hard to parody. A number of comedians have fallen into the trap of trying to beat them at their own game, and the latest to fall short attempting to mock the lunatics of the far right is Sacha Baron Cohen.

Who is America? has been a comedic breath of fresh air. The show at once skewers the polarized political landscape and mocks the “reconnecting with America” journeys that every media outlet has pursued in an ill-fated attempt to make sense of Trump’s election. While characters like Israeli operator Erran Morad and creepy Scandinavian YouTuber OMGWhizzBoyOMG are hilarious and insightful, there is one character on the show who just doesn’t work: Billy Wayne Ruddick.

The character of Ruddick should be funny. He’s a scooter-riding buffoon who spews conspiracies through a Southern drawl. He is a combination of the most radical aspects of Alex Jones, Glenn Beck, and a doomsday prepper, promoting every conservative conspiracy theory under the sun as he wages a one-man battle against fake news. On Sunday’s season finale, Ruddick was back to spew Pizzagate nonsense.

Cohen has tried a number of segments starring Ruddick, and they’ve mostly fallen flat. He interviewed Jill Stein about climate change, attempting to get her to admit global warming is caused by weaponized weather machines. He tried to convince Howard Dean that Hillary Clinton is secretly a man. He shared racist conspiracy theories with Corey Lewandowski. He blamed the ACA for his health problems in his interview with Bernie Sanders.

While the claims Ruddick makes are wild, they are on par with the right-wing charlatans he mocks. At InfoWars, Jones has ranted about the government “turning frogs gay.” You can find videos of him entitled “Alex Jones Shirtless Compilation.” Jones has also claimed the moon landing was staged. Some of his assertions have had terrible real-world consequences, such as his insistence that the Sandy Hook mass shooting was faked.

An essential part of parody is exaggerating aspects of your target to draw attention to their ridiculousness. Jones, Paul Joseph Watson, and Mike Cernovich are already ridiculous. Recently, we’ve seen conspiracies involving pedophile pizza shops and political prophecies hidden in ‘90s magazines churning through the far-right corner of the internet. The most prominent figures on the conspiracy theory right have armored themselves against parody by becoming parodies of themselves.

In Ruddick’s discussion about global warming with Stein, he actually uses some of the same talking points that Jones has used himself, claiming that the CIA is weaponizing the weather. If there isn’t any daylight between Jones and parodies of Jones, what is the point of the parody?

Cohen isn’t the first person to fall into this trap. Of the various attempts to spin-off standalone efforts from The Daily Show, Jordan Klepper’s The Opposition was one of the shortest lived. The show’s cancellation was largely attributed to Jones and figures like him discrediting themselves so thoroughly that Klepper didn’t have much room to operate. In discussing the cancellation of The Opposition, Comedy Central President Kent Alterman said, “The show was anticipating the Steve Bannons and Alex Joneses of the world to be front and center, and the truth is, it’s really Trump front and center.”

Alterman is right, but that doesn’t mean that Bannon and Jones don’t have any influence. These figures have immense support among their fringe sect of true believers. However, the masses already know Jones is ridiculous, and the rest of society doesn’t need a parody of something they already think is outrageous. 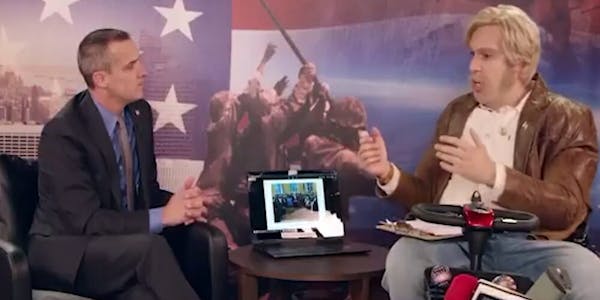 Davis Sims of the Atlantic touched on the same issue when he wrote about Stephen Colbert’s impression of Alex Jones, Tuck Buckford, in his piece “Stephen Colbert’s Alex Jones Parody is Hardly a Parody.” Unlike the other conspiracy theory parodists, Colbert opts for straight-up mimicry. His bit isn’t just about what Jones says, but how he says it. He loves to imitate the tone and cadence of Jones, and sometimes even uses clips from InfoWars in his bits.

This precise imitation, Sims argues, is the key to Colbert’s success. He points out that Colbert’s task is difficult because, “Colbert has thrived on CBS by leaning into political humor, but he’s had that job made easier for him by the constantly moving target: It’s not tough to parody the fringe media when they admit they’re parodies themselves.” Instead of playing up the absurdity of Jones’ claims, he plays up the fact that it is a performance.

Tuckford, like Jones, gets louder, redder, and madder as the mainstream world leaves him behind, boots him off of their platforms, and discredits him completely. In segments like “Tuck Buckford will not be silenced,” Colbert plays off of Jones’ transparent desire for attention. He even creates a fake battle for attention by claiming that Jones was actually ripping him off. Buckford, like Jones, will increase the intensity of his theater more with every viewer who unsubscribes.

Colbert’s impression is funny and popular (some Tuck Buckford segments have a million views on YouTube). They work because it isn’t enough to simply parrot the extreme claims these figures make and try to stretch them further. Taking down conspiracy theorists using comedy requires something more than simply expanding on the lies that they tell. You have to go beyond what a figure like Jones says and poke fun at what animates him to say it.

While their fans are true believers, deep down these people aren’t. The best strategy is to attack these people for the self-conscious snake oil salesmen they are.  They are just trying to turn a dollar and compensate for their failures, and that is where they are most vulnerable. Colbert peppers his bits with begs for Venmo donations and plugs for racist sports drinks to emphasize Jones’ transparent greed because he knows that the way to deflate Jones is to call him a fraud.