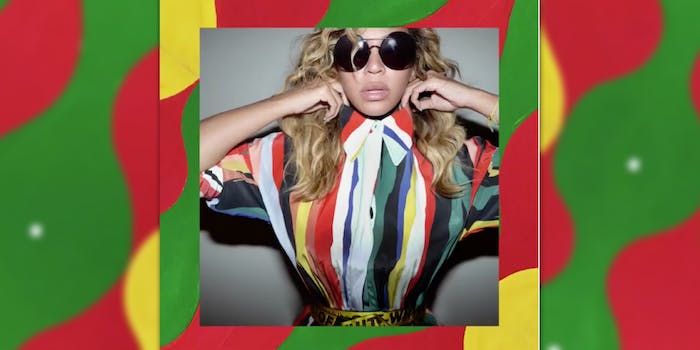 The queen is at it again.

On Thursday night, Beyoncé unveiled her latest effort to raise funds for hurricane and earthquake relief in Puerto Rico, Mexico, and islands across the Caribbean.

Working with Colombian reggaeton artist J Balvin and Mauritian-French DJ Willy William, Bey released a remix of Balvin’s song “Mi Gente,” which she shared to Instagram. In her post, which has received more than 4.2 million plays in the 10 hours it’s been online, Beyoncé wrote that her proceeds from the song will be donated to relief charities helping those affected.

I am donating my proceeds from this song to hurricane relief charities for Puerto Rico, Mexico and the other affected Caribbean islands. To help go to Beyonce.com/reliefefforts.

In the post, the artist directed fans eager to donate to a relief efforts page on her website, where she’s linked to various efforts helping Mexico, Puerto Rico, Caribbean communities, Florida, and Houston.

In the remix, Bey sings in Spanish and English, and mentions the areas hit by earthquakes, and Hurricanes Harvey and Irma, singing, “Lift up your people, from Texas, Puerto Rico, dem islands to Mexico.”

The remix even includes a line from Beyoncé’s 5-year-old daughter Blue Ivy Carter, after Bey calls out, ‘Azul, are you with me?’ and Balvin says, ‘Say yeah, yeah, yeah.’ Blue replies, ‘Oh yes, I am.

A lyric video for the remix sits at no. 1 on YouTube’s trending videos with more than 1.5 million views. Watch the full video below: