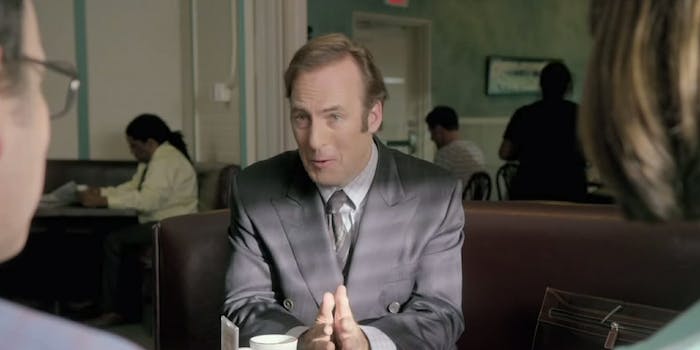 It's always good to have loyal fans.

AMC has successfully parlayed its rabid Breaking Bad fanbase into a sustainable commodity that travels well.

Bob Odenkirk’s solo vehicle was behind the race for overall eyeballs, sure, but its 6.9 million viewers made it the highest-rated cable series premiere in history. (The most-watched however, remains TNT’s The Closer; it’s an important technicality.)

In addition to record ratings, the Breaking Bad-turned-Saul fandom can now claim the fastest-growing non-default community on Reddit.

We’re only two episodes into the series, and already the creators seem to love weaving in Breaking Bad references and Easter eggs—making this particular subreddit an ideal place to discuss conspiracy theories and strange coincidences.

The show itself has received an initial wave of critical acclaim; the blog-driven culture of dense show recaps approves of what it has seen so far.

The period-piece dynamic of Saul, which is set in 2002, gives it room to build in backstory and comfortably weave in familiar, pre-Bad faces. But in another nod to Breaking Bad, the series itself began by reassuring audiences that Saul made it to Omaha, Neb., after his adventures with Walter White. Saul was, in fact, lucky enough to helm a Cinnabon franchise (hence the social media-spurned marketing campaign).

Better Call Saul has 11 years to take us back to Bad, and its Reddit fans will be watching and talking all the way there.