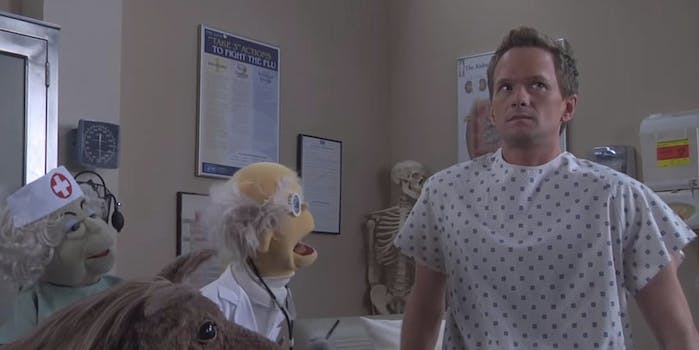 The 5 best webseries about puppets

'Neil's Puppet Dreams' is just the tip of the iceberg.

Muppets aside, puppets have a bad reputation in media circles.

Next to clowns, ventriloquists, and accordion players, bad puppet shows have been known to lead to violence, hissing, and booing among audience members. And let’s not forget Craig Schwartz (John Cusack) from Being John Malkovich, who got the snot beat out of him for his graphic sidewalk puppet show.

YouTube boasts a mix of odd, funny, and just plain delusional puppet webseries that will lead to laughter (or anger, depending on your state of mind) and tolerance for this ancient art form. These videos featuring characters with someone’s hand in their back (or in a sock, as the case may be) tend to lean toward more adult themes and sarcasm. Perhaps the inherent naivete of puppetry provides a powerful juxtaposition to ribald humor… or perhaps I’m giving it far too much thought.

Here are five series worth a second look from kids of all ages.

Young kids are not left out of the puppet webseries genre. This fairly well-produced series is the story of a group of puppets on a space station with good old Dr. T (a.k.a. Dr. Tottlebottom), who resembles a more over-the-top-version of Kathy Kinney from The Drew Carey Show. She offers pearls of wisdom to her puppet friends on the spaceship, with the goal of each episode being to speak to kids about such issues as self-esteem and the power of imagination. The show is cleverly animated, and it does not go overboard with its pointed storylines. For youngsters up to age 10, Sassafrass is just cute enough to hold kids’ attention for each 10-minute episode.

2) The Kingdom of Wishes

Also aimed at kids, Tim’s Puppet Pals is a troupe of entertainers based in Salem, Ore. The group’s series, The Kingdom of Wishes, represents a strong effort with good intentions, but it’s a bit confusing in spots. The opening episode starts with a young orphan looking to escape his plight when he runs into Duffledorp, a large, white monkey puppet who has the power to grant wishes. After a brief opening scene, there is a break with a voice-over narrative that stops the momentum of the show—something likely to bore and turn off younger viewers. With just a bit of tweaking, Kingdom could be more compelling.

Heading into Avenue Q territory, Neil’s Puppet Dreams features Neil Patrick Harris, the multitalented host of the 2015 Oscars (and star of a long list of TV shows). Puppet Dreams comes off as a sequel of sorts to his 2008 Web hit, Dr. Horrible’s Sing-Along Blog. The premise is built around the absurd (yet cute) notion that when NPH dozes off, he dreams in puppets, giving him the chance to showcase his singing and dancing talents. The humor is strictly for adults, as in his episode called “Doctor’s Office,” in which the sleeping star is given the once over by a group of puppet doctors, nurses, and orderlies. (As an easter egg for fans, it also guest stars Dr. Horrible nemesis Nathan Fillion.) There are some great double entendres, elevating the series into a show aimed primarily at mature audiences, but the laughs never cross the line to become smarmy or uncomfortable.

An evergreen oldie, Totally Socks lands somewhere between Saturday Night Live and a great subway busker act. Using sock puppets (not a hole in the bunch), Oklahoma filmmaker Lance Ward keeps the animation simple, relying on clever dialog that appeals to the 15-year-old in all of us. Without giving too much away, this typical episode has two puppets cast as Sherlock Holmes and John Watson attempting to identify the canine whose droppings illegally littered a public sidewalk. Trust me, it’s funnier than it sounds.

I’m still trying to grok the concept behind this rather peculiar puppet show. Makeda is a throwback to that psychedelic ’60s era where flower power, Hair, and EST ruled the planet. The series, in which puppets are used to represent Makeda’s alter egos, is the result of a successful Kickstarter effort by Brooklyn-born Makeda Declet. A graduate of New York University’s Tisch School of the Arts, Declet no doubt is delivering a message with her puppetry; if someone can figure it out, let me know.