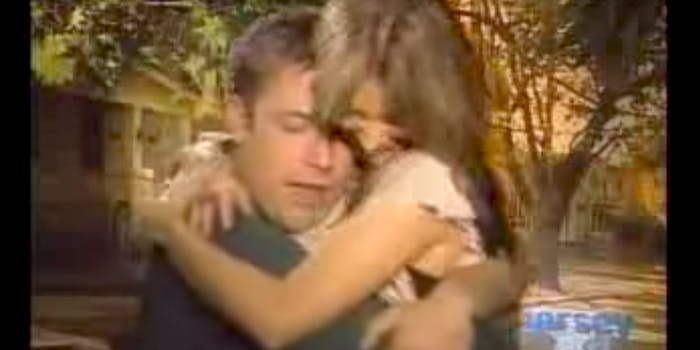 Ben Affleck is super creepy in this 2004 interview

The actor apologized for the old footage Wednesday on Twitter.

Ben Affleck has a history of behaving inappropriately toward women.

An interview from 2004 shows the actor being very touchy with Canadian TV host Anne-Marie Losique and making several inappropriate comments about her breasts.

During the interview to promote his film Jersey Girl, Affleck is seen with his arms wrapped around Losique while she sits on his lap.

“You usually show a lot more cleavage than this,” Affleck said to the host after complementing her perfume several times. “What’s the story? Why are you covering it up today?”

After Losique responded with saying it was Sunday morning, Affleck said, “That never stopped you before from getting those titties out.”

Affleck went on to continue talking about her breasts in a silly accent while hugging her tightly.

“Are you wearing your nipple ring?” Affleck later asked.

He also made a joke about “sounding retarded” and having cerebral palsy before making jokes about having sex.

“Goodbye my sweet girl,” Affleck ends the interview saying as he hugs Losique and can be heard smelling her. Throughout the five-minute interview, the host does not leave his lap and Affleck does not discuss his film. Affleck was reportedly dating Jennifer Lopez at the time.

This interview video is resurfacing after Affleck was accused of groping actress Hilarie Burton back during her time as a host on MTV, and made a public statement saying he was unaware of Harvey Weinstein’s sexual allegations, which Rose McGowan accused him of lying about. Affleck has since apologized about the Burton incident.

I acted inappropriately toward Ms. Burton and I sincerely apologize

Update 9:25am CT, Oct. 12: Losique told Refinery 29 on Wednesday that she was never uncomfortable with Affleck during the interview and thought it was “cool” to be sitting on his lap.

“[It was] nothing improper. It was just fun and games. I thought it was funny. In this context, very honestly it shouldn’t be mixed with the issue at hand,” she said, referring to Affleck groping Hilarie Burton on TRL. “I actually encouraged [it] a little bit because I would it would be good TV. You know for girls, he was a sex symbol, and I thought that it was so cool that I was sitting on his lap…Here in Quebec, it was portrayed in a very good light.”
Share this article