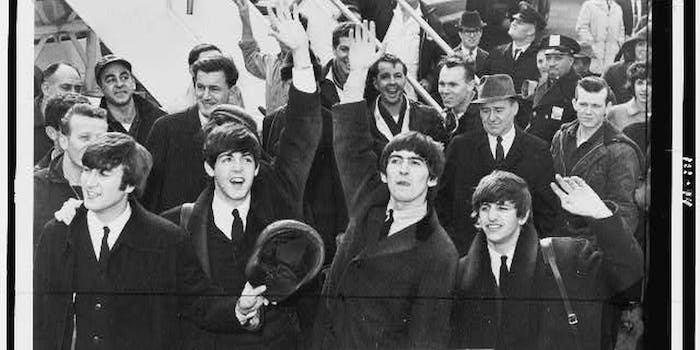 CBS's star-studded tribute Sunday night may have fallen short, but let us make it up to you.

Yesterday, CBS honored the 50th anniversary of when the Beatles melted American culture on The Ed Sullivan Show with a star-studded concert, but the high-calorie spectacle was tough on the stomach. Somewhere between the house band of uninspired session millworkers, Katy Perry‘s melodramatic cover of “Yesterday,” and a dreadful version of “Revolution” from Imagine Dragons so state-sanctioned that Vladimir Putin slow-clapped in awe (probably), I questioned—for the first time ever—the staying power of the Fab Four.

The baby boomers have successfully found a way to sell the Beatles every five years or so since 1970 with retrospectives, compilations, commemorative video games, remastered versions of seminal releases in mono, films, Vegas shows, induction ceremonies, anthologies, the Super Bowl XXXIX halftime show, live albums, etc. Every occasion seemingly ends with Paul McCartney on a piano leading the “na-na-na-na” chants from “Hey Jude.” These projects are all fine opportunities for 7-year-olds to become lifelong fans; in general, their mere existence is a net positive for societal progress.

But not Sunday’s useless “reunion” concert.

That’s because the Beatles are the uncanny valley of rock. No matter how intricate the licks John Mayer and Keith Urban write out in cursive, no matter how soulful Alicia Keys and John Legend are while belting “Let It Be” on dueling pianos, offering up Beatles covers is a perpetual fool’s errand because Beatles standards are as distinct as they are popular. The Breeders are a well-regarded alt-rock band from the ’90s whose spirit animal Beatles song is “Happiness Is a Warm Gun.” Yet their version’s terrible because it was an easy and lazy undertaking that did nothing to challenge the DNA of the original John Lennon cut—making its whole existence, then, just as superfluous.

When the rare Beatles cover works, it’s not because a great voice took a ctrl+C command to sheet music and spat out a shinier rendition (see: everything that CBS aired Sunday). On the contrary, the rare, worthy Beatles cover deconstructs, finds a fresh emotional perspective, and attacks.

These are 10 Beatles covers you’ll be well-served to listen to.

I’ve run this clip back at least 20 times a year since ’09. It’s pretty easily my favorite Beatles cover. Again, there are no obscure songs when we’re laying out this catalog. To that end, going for “Dig a Pony” is a precocious move because it’s as close to a hidden gem as the Beatles allow . It’d be a miserable failure if Annie Clark was a soft voice cartwheeling through a Pitchfork blurb. But she has hands like a mechanic and taps into the song’s landlocked emotional prism.

I dig this version of 1965’s Rubber Soul time-stopper. Brooklyn indie dance buzzkill collective Rubblebucket is combatively sugary on its lovesick version—the band emphasizes the “I love you” section in oddball fashion, turning it more Buddy the Elf than Paul McCartney. It goes down like one of those Cool Whip pies with an additional, inch-thick layer of cream.

Recorded only a decade after the original, this 1976 punk cover is octaves apart from the sad but optimistic original. John Lennon shed his former band’s early stuff as he inched toward middle age in the ’70s, but he was always proud of “Help” because of its emotional maturity; it wasn’t just a pretty-face melody. Then again, Lennon also reportedly disliked “Let It Be” because he felt that it endorsed the status quo during a time of uprising, so what the hell did he know?

Despite its prime real estate on the White Album, “Dear Prudence” is an entirely dispensable Beatles song. It doesn’t even get picked in the top 50 of a Beatles song draft. But transpose the melody, interpret lyrics like “come out and play” or “look around” as sullen post-rock, and it’s a U.K. chart-topping rainy day anthem.

5) Daniel Johnston, “Got to Get You Into My Life”

McCartney is a world wonder because of his pop sensibilities—the guy has infinite melodies. But without Lennon’s realist editing, he skewed too sunny at times. The original was basically a show tune, until the ever-unbalanced Central Texan Daniel Johnston took the song’s naïve, heel-clicking nature and—with just a pinch more earnestness—turned a hair-raising, stalker-ish corner.

Most of the soul Beatles covers are entirely righteous. Joe Cocker, Aretha Franklin, Stevie Wonder—they took pristine melodies and buried them in bark-at-the-moon humanity. There’s a live cover of “She Came In Through the Bathroom Window” from Ike & Tina Turner that strikes the shin like a drunken slide tackle. Pickett’s “Jude” is a bottle of Evan Williams tipped over, short-circuiting the Fender Harvard amps. You can almost mosh when then-session guitarist Duane Allman opens up the playbook, and Pickett loses his shit at the end.

Speaking of moshing…Brooklyn-based doom metal lifers Type O Negative take their metal chops to an unlikely trio of sunny, early Beatles standards. The first-day-of-guitar-lessons riff in “Day Tripper” is bacon pressed to thick, flat perfection. But the real gem drops two-plus minutes in, when bassist and singer Peter Steele drops the “If I Needed Someone” bridge and chorus, singing it like a depression-riddled cry for help.

On this collaboration between leading Japanese experimental noise musicians, there’s an ever-present sucking noise mixed on top that sounds like a ghost ship overrun with cannibal rats.

“I Must Be In Love” is a Rutles song that parodies “A Hard Day’s Night” and, more so, the enduringly simplistic nature of the early Beatles singles and their effective, youthful, lovestruck puns. “She’s a dream, she is real” goes the kitsch. Here it’s a melancholic, face-value exchange.

Simone had classical piano chops, jazz hands for days, and was great at peeping into the pop world and poaching structures. Here she takes Lennon’s roll call of things that are problematic on a macro level and fleshes out a more focused protest niche.

Photo via Library of Congress/Wikimedia Commons