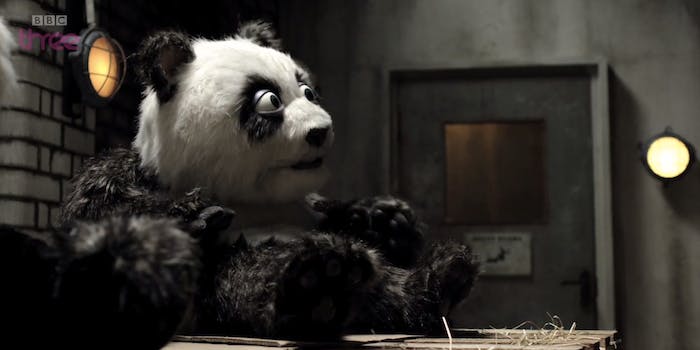 Competition is especially fierce this year as the network is going digital-only by next fall.

Is the next Mighty Boosh out there waiting?

The BBC’s annual Feed My Funny Comedy Feeds have dropped, with nine comedy pilots uploaded onto the network’s streaming service, iPlayer. Now we just have to see whether the BBC has managed to unearth the new Monty Python’s Flying Circus, The Office, or Little Britain—or, more likely, something like Cuckoo.

Progression from pilot to series is competitive at the best of times, but the news that BBC Three, the commissioning channel for Comedy Feeds, will become an exclusively digital entity in the fall of 2015 will most likely mean less original programming—and therefore steeper competition.

But are any of them worth developing anyway? Are any deserving of following People Just Do Nothing, Nick Helm’s Heavy Entertainment, and Impractical Jokers from Comedy Feed into full-fledged series?

Let’s take a look, from best to worst. (Full pilots are restricted to British IP addresses, but we’ve embedded short clips from each for reference.)

Written by and starring stand-up comedians Naz Osmanoglu and Tom Rosenthal, Flat TV has its roots in a four-part webseries. Its extra time in development shows. It’s comfortable with its intriguing and potentially expansive format, and gone is the strange teething period where actors are trying to work out their characters. Easily the most TV-ready of the batch.

The premise is as old as a couple of the gags, but the casting is so brilliant that we’re willing to let that go. These sort of shows thrive (or die) on cast chemistry, and there is plenty of it here; Aisling Bea is eye-catching as the irresponsible housemate. If this isn’t picked up, I’m sure she’ll show up somewhere soon.

Kayvan Novak plays a host of characters over the course of a school’s parent-teacher evening.

It was only a matter of time before Novak (of Fonejacker and Facejacker fame) brought back the prosthetics and started messing around with new characters. Unlike his previous shows, there’s no prank element here, but each of his creations is still fully realized and most importantly, funny. The current format is a dud (there is no interaction between any of Novak’s characters), but there are signs here that he should be back on our screens.

Josh moves back into his old shared apartment after a breakup.

Josh is probably the most likely to be commissioned for a full series as it stars comic du jour Josh Widdicombe. It’s probably about time that Widdicombe had his own sitcom—he’s now a mainstay on the U.K. panel-show circuit—but is this it? Sure, it showcases his dry, self-effacing humor (plus includes a part for the peerless Jack Dee) but outside of being a Widdicombe vehicle, it is pretty empty and lightweight.

Surreal sketches taking place in a world populated by puppets.

The overarching premise of Adam Miller and Nico Tatarowicz’s show is so vague there is little to tie the disparate sketches together. There’s nothing wrong with that, but with no narrative fallback, the weaker moments only become more noticeable. Unfortunately there are a few misfires here, but surely it would be a waste to never use those excellent puppets again.

Two useless cops try and climb the rungs at work by taking an investigation into their own hands.

It’s a worrying sign for the two leads when Paul Kaye exudes more charisma in the 30 seconds or so he is on screen than they can muster in the entire episode. Ashley Walters (star of Top Boy and former member of So Solid Crew) and Adam Deacon (Kidulthood) look uncomfortable in what should be a viable setup. With neither having the comedic chops necessary, this was always going to be a struggle.

A new manager and staff member arrives at one of London’s ubiquitous fried chicken shops.

As well as feeding the city’s urban foxes, London’s fried chicken shops are also inspiring the creative arts; most noticeably in the excellent, fly-on the-wall The Fried Chicken Shop. Fried may be the nadir of this movement; it’s obvious, inoffensive, and bland. Nothing at all like a 3am “Junior Spesh.”

A group of friends in East London continually make trouble for themselves.

Not unlikeable—charming even—Rude Boys is let down by basic execution. Timing is off and a couple of the leads are comedically underdeveloped. It all comes across as inexperienced rather than simply bad, but no one should get a free ride on promise alone. Keep working, boys.

Comedian Jenny Bede plays a range of well-known characters from the pop world.

Book-ended by an embarrassingly ordinary Miley Cyrus impersonation (she sticks out her tongue and everything), this show is filled with unintentionally painful depictions of Taylor Swift and Nicki Minaj. Bede is apparently a “YouTube sensation,” which seems more of a fit for her; far away from the eyes of the kind of people who write into newspapers complaining that their tax money is being wasted on “this nonsense.” I agree with them, but let’s just save everyone the aggravation.