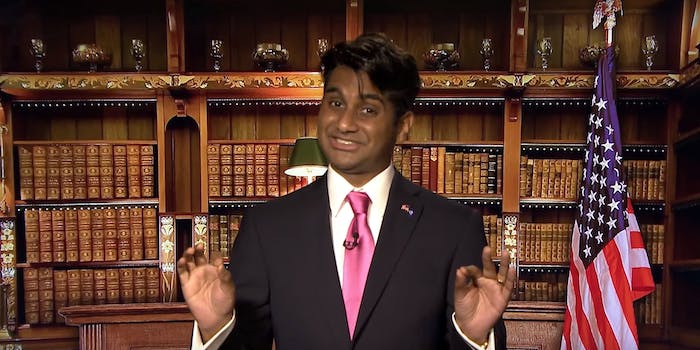 Bobby Jindal’s 2016 campaign is over, but Aziz Ansari isn’t done with his impression

'Jindal' has some big ideas now that he's no longer a candidate. Good luck with all that, sir.

Bobby Jindal may be out of the 2016 presidential race, but don’t rule him out on anything else just yet.

After debuting his incredible Jindal impression just over two weeks ago, Aziz Ansari returned to The Tonight Show on Thursday to show Jimmy Fallon just how the Louisiana governor is holding up after ending his campaign—or, as he puts it, suspending it like Han Solo in carbonite. And “Jindal,” for one, was still thrilled that Fallon actually meant to talk to him (maybe other hosts called him by accident trying to reach Donald Trump?).

“Jindal” has plenty of plans to keep him busy. He has a cringeworthy Fox News show in the works and is doing some high-concept nude self-portraits after a former president got him into oil painting. Running Louisiana might be a good idea, too.