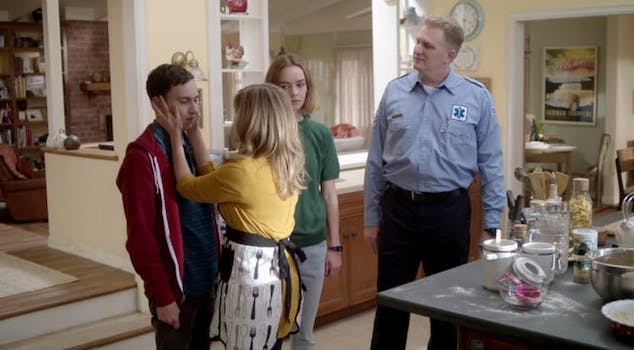 At 8 episodes, the dramedy keeps its narrative tight. It's an easy and rewarding binge.

Since Netflix began rolling out original content, I’ve found its comedies far superior to the acclaimed dramas. The streaming giant’s latest comedy, Atypical, continues that bias: Kimmy Schmidt, GLOW, the canceled Girlboss, and even season 4 of Arrested Development, are more interesting than what’s happening in their melodramatic stabs at prestige. By expanding the typical prime-time sitcom from 22 minutes on a broadcast network to a full 30 on streaming, these series are able to flesh out the dramatic side of the story and it’s a more entertaining and whole experience.

Atypical revolves around Sam, an 18-year-old on the autism spectrum, and his family. Despite the sensitive subject matter, the setup is almost standard issue. First loves, bullies, mundane day-to-day life, marital problems—you know, the fodder of nearly all family dramedies. But Atypical plays everything straight, so the funny parts pop while the drama is a sobering gut punch. The show walks a fine line in depicting Sam, and it’s easy to imagine how a lesser series could’ve mangled his character. Instead the show lets Sam be himself, and sometimes it’s amusing and sometimes it’s awkward as hell.

The writing on the show is authentic in both its characterization and plotting, but the cast makes it work. Keir Gilchrist makes Sam easy to understand without compromising the character’s complexity. The look Gilchrist has on his face when he’s overwhelmed, accented by closeups and point-of-view shots, tells you everything you need to know about the character; same goes for the moments when everything makes sense for him, when everything follows the rules, and you feel his momentary relief.

Sam’s parents, Elsa and Doug (Jennifer Jason Leigh and Michael Rapaport), provide the opposite perspective, which is just as messy. Elsa runs the family and keeps the order, but as her control over everyone starts to flounder, so does she. Doug is taking a more active role with his kids, handling situations and conversations Elsa usually takes the lead on. And there’s Casey (Brigette Lundy-Paine), Sam’s sister. She’s used to watching Sam’s back, but a track scholarship offer and first boyfriend are upending her stability. One of the pleasures of the series is seeing how everyone reacts to the constantly changing circumstances. It’s the key theme of the show. No matter how confident you are, your sense of control is temporary at best.

Your relationships evolve, whether it’s positive (Doug connecting with his kids in a new way) or negative (Casey learning why Doug missed an annual Autism charity event). Where the show really gets it right is that the positive changes for one character impact the rest of the family just as dramatically as the negative. Take Doug talking to Sam about girls: His advice for Sam is good, great even. But by talking to Sam about this, Elsa now feels like she isn’t needed, which drives her into a flirtation with a local bartender, which disconnects the siblings. As the family tries to strike the right balance, it becomes clear to the audience that the balance doesn’t exist. It never did and never will.

Atypical doesn’t overstay its welcome. At eight episodes the show keeps its narrative tight. It’s an easy binge, but also plays well in single servings. It’s just a good show, through and through. Creator Robia Rashid has assembled a strong team on both sides of the camera. The stories are told with confidence even when the characters lack it. It finds humor and drama in the awkward spaces real life creates, often in the same moment.