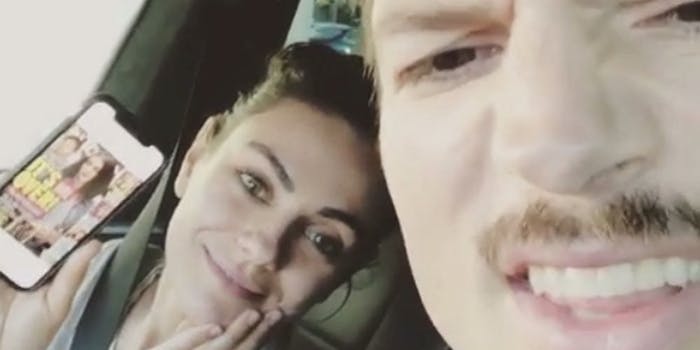 'You had a very dark secret exposed.'

Ashton Kutcher and Mila Kunis have a fairytale romance for the ages. After meeting on That ’70s Show in 1998—where they played teenage couple Michael Kelso and Jackie Burkhart (he was her first kiss!)—they eventually hooked up IRL nearly six years after the long-running sitcom ended. Now, they’re happily married with two kids, so of course, all of this makes them a prime target for trashy tabloid gossip fodder.

This time, InTouch Weekly is reporting that “IT’S OVER” between the two in an all-caps cover story. Rather than ignore the claims, the couple addressed them in a cutesy video that Kutcher posted to Instagram.

It’s either a charming debunker or good damage control. Either way, the video has become a social media hit.

I guess it’s over @intouchweekly have fun selling magazines this week. Maybe next week my wife will be having twins. For the third time. But who’s counting.

They continued their playful back-and-forth, playing dumb as to the divorce allegations. “I felt suffocated,” Kunis deadpanned to the camera.

“You felt suffocated by me? Oh, I was just so overbearing.”

“You took the kids, I don’t get the kids anymore?”

“You had a very dark secret exposed.”

“Oh my gosh, what was the dark secret?”

“I guess it’s over…” Kutcher lamented in the caption. “Maybe next week my wife will be having twins. For the third time. But who’s counting.”

Other celebs got in on the joke, commenting on Kutcher’s post. “DAMNIT!!! I was gonna take a run at MK!!! I want a refund!” wrote his Punk’d partner in crime, Dax Shepard. “#FakeNews,” added Rumer Willis, the daughter of Kutcher’s ex-wife Demi Moore.

Likewise, fans responded to the joke on Twitter in only the most appropriate way possible—with That ’70s Show memes.

That mustache, though. It’s a good thing there is apparently no trouble in paradise because otherwise, that would be grounds for divorce alone.