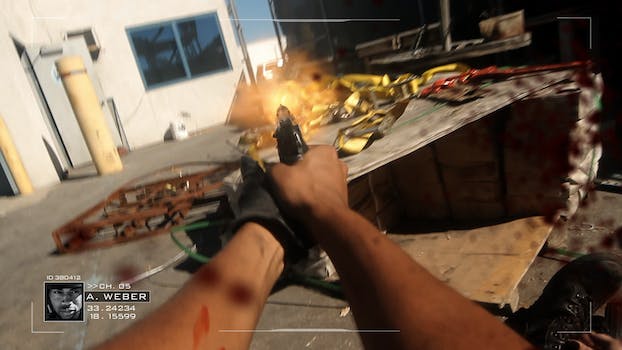 Some of the nation’s biggest stories and tragedies now play out on Twitter, YouTube, Wikipedia, and Reddit, as citizen journalists capture and curate news in the making. And we’re now getting a new perspective on war that we haven’t seen before: footage from the viewpoint of the very soldiers who are fighting overseas.

Armed Response, the newest webseries from Break Media, combines both aspects to tell the story of a Homeland Security team battling a Mexican cartel at the Port of Long Beach. It’s told entirely through POV helmet and security cameras, so it feels as though you’ve been dropped into the middle of a first-person shooter, like Call of Duty or Modern Warfare.

Break Media is launching Armed Response on March 13, as a four-part webseries on its new YouTube channel, Hardcoded.

The Daily Dot talked to Break Media’s SVP of Entertainment Development Greg Siegel, producer Tom Bannister, and writer Matt Michnovetz (Star Wars: The Clone Wars, 24) about the origins of Armed Response and the freedom that comes with producing a webseries.

Daily Dot: Where did you get the idea for Armed Response?

Tom Bannister: It really came out of just really watching the Internet and being fascinated by the way that news—and especially more viral news—is covered on the Internet, and that’s anything from journalism on YouTube where soldiers put up the head cam footage (which is fascinating) to the articles that follow the exploits of soldiers, to stuff like the Japanese tsunami and the way that was covered on security cameras. Or more recently, I think just the way that we get news at the moment, which is on our cell phones, recordings, something that the whole world is watching, and that becomes the most shared, the most viral thing on the Web.

And there’s a real cross at the moment on the Web between news and entertainment. So I think Armed Response comes out of that, and seeing those videos.

Greg Siegel: From our perspective, this kind of visceral action video works so well online and so well with our male 18-34 demo that from our perspective it’s the perfect kind of programming that audiences are beginning to respond to. 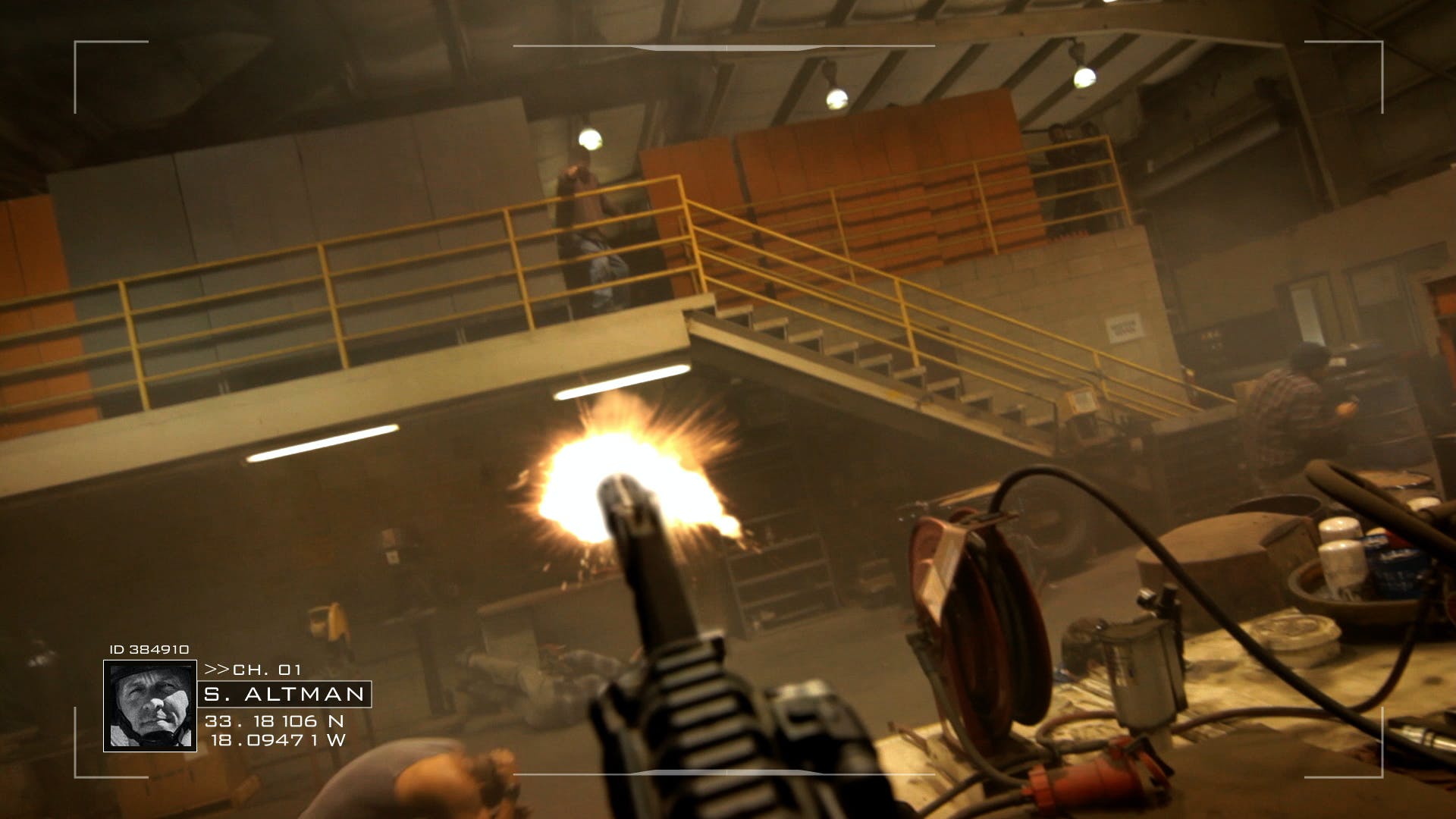 DD: What does the success of Halo 4 [a commercial and critical success which recently won four Streamys] say about the future of action/drama webseries?

TB: I think that video game elements within our show are very important. … Matt obviously has an interest in video games and video-game writing. So we just threw all these ingredients together and used video games and different takes and actions in a way into the melting pot.

GS: And the thing that series like Halo and others I think just show the appetite from audiences it’s clear that this is the audience of the Web, and extending that type of series from existing IP [intellectual property] to original IP that you can launch based on the genres that these fans are consuming is a really compelling thing to do. And speaking to that originality, this is something people can get in from the ground up, not having to know anything about the original brand. It’s new; we’ve got some great characters, great acting and directing, and I think it’s an original form of storytelling that’s not constricted by the boundaries of a game or another type of brand that’s been out for a while. 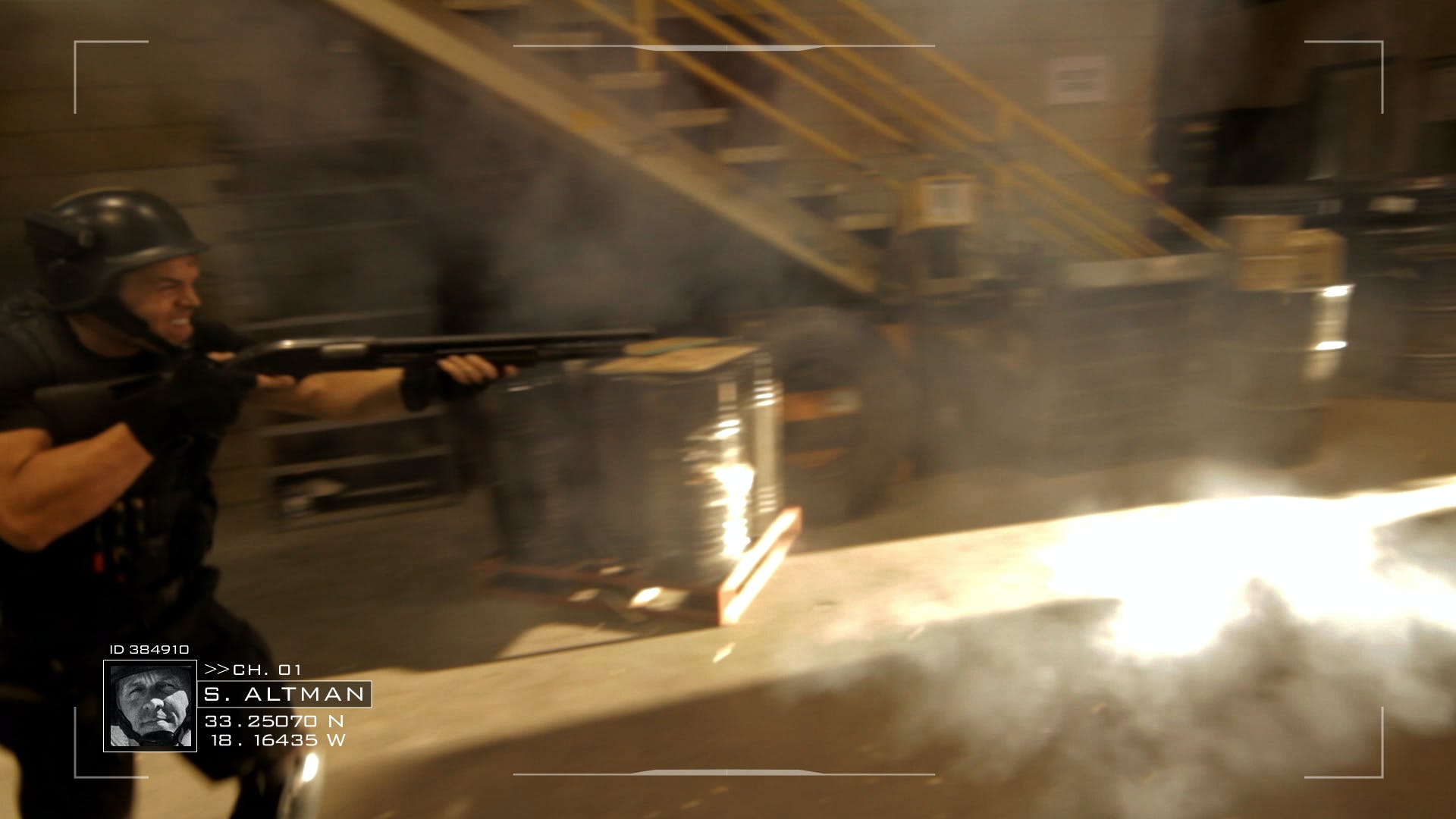 Matt Michnovetz: I’m absolutely fascinated by the Web, and when these guys came to me with the idea of doing “final footage” action and the action genre, I thought, “Genius.” Blown away. And this was even before watching—I just saw Zero Dark Thirty—the last 20 minutes of that movie really cemented the fact that there’s something here that can be done, and as long as we have some great characters and unique storytelling, it’s unlimited essentially where you can go. I like not having the constraints—we’re constrained by budget, obviously—but I think these guys have done a great job figuring out a way to do that. And that’s something the freedom of the Web basically provides. And obviously we’re coming on uncharted territory here.

TB: I remember when we first started doing this; I believe it wasn’t that long after the bin Laden thing, and I think the idea of being there with a team of Special Forces team and seeing from the perspective of the helmet cameras, I think that was very real to people and we were wanted to expand on that a little bit.

MM: That’s one of the things that’s great about the Internet opposed to working at a network with all the constraints that that poses: You’ve got the freedom to be a little more experimental and figure out what works and tie in something. Even if the episodes are short or if they’re long, we can scale them to what’s appropriate entertainment-wise, and then have the story flow with that.

DD: What is the story you’re trying to tell in Armed Response?

MM: It’s the rise of a young agent and how she stumbles into this situation and is thrown into a trial by fire to come out on the other side a little more hardened, a little weary of what she’s dealing with, and of course it’s open-ended to the potential that we could do more with her. As it is, it’s a story of a mentor passing the torch to his apprentice, and how she takes the ball and rolls with it and has to deal and rise to the position of leading this group who finally take these guys down. 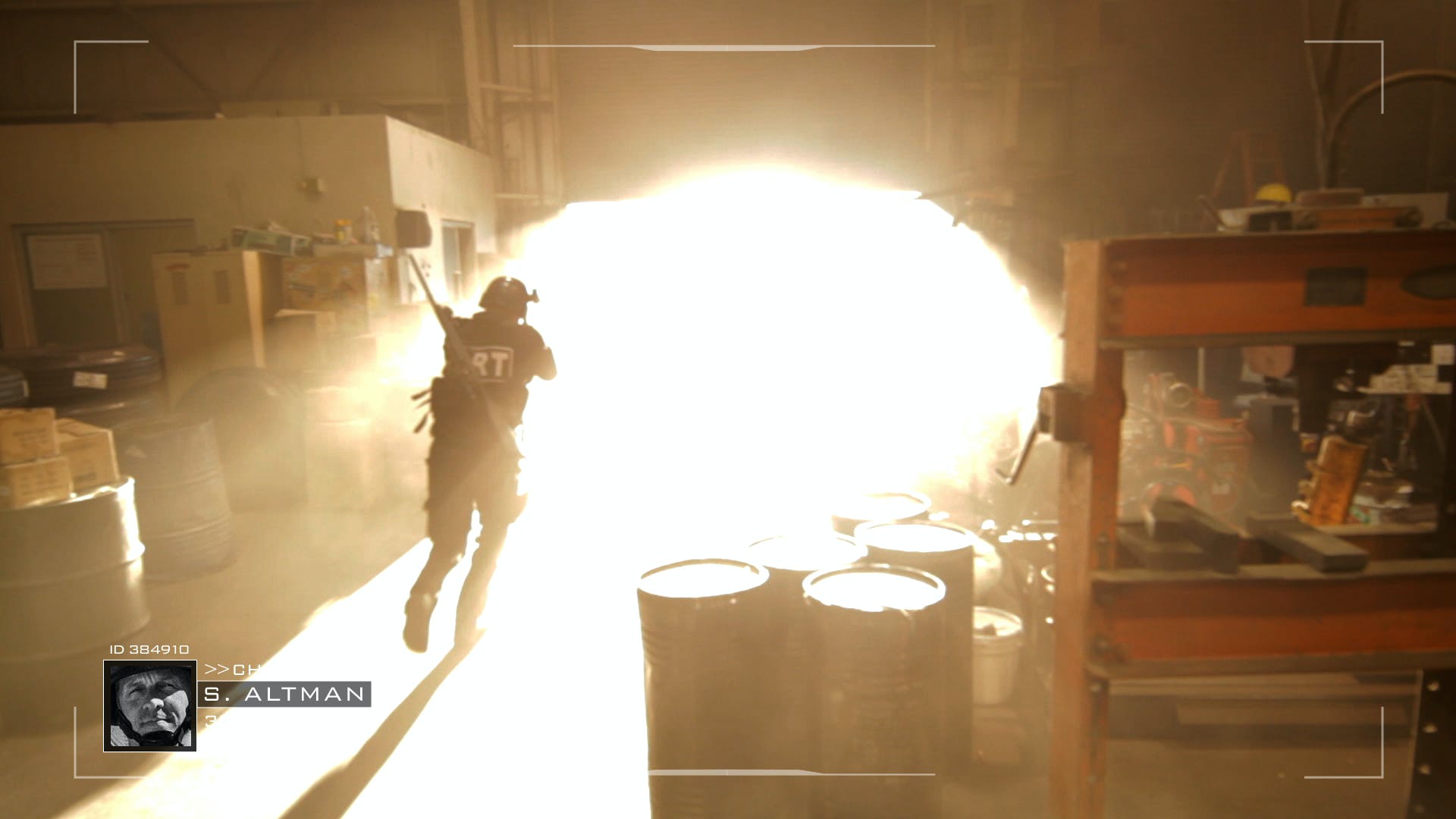 DD: Women aren’t often seen participating (or even leading) missions of this nature on TV. How important to the story was it that Kara Sanchez [portrayed by Camille Guaty] was a woman?

TB: We always knew we wanted the hero to be a heroine. Female characters in unusual or intimidating situations are often more frightening than male characters in the same situation. Armed Response is about trying to place the viewer in the middle of a fire fight, and we felt this would be more impactful if it was through eyes of a female character. Much like a horror movie.

DD: How much of the footage was from helmet cameras, and how much did you have to shoot yourselves?

TB: Justin [Lutsky], the director, went in knowing he wanted very specific shots and an idea of how he was going to tell a story. But we had to build those helmet cams to rig up like a camera, so actually when you’re looking at all of the heads, all of the cameras are done by the same guy. Even the actress, the female character, is actually a guy running around with a heavy helmet rig on there. So actually the guy who played the sniper was also the cam person. Even if it’s generally one guy doing it, we’d switch the helmet cam depending on which actors’ perspective it was. What we didn’t know when we started doing it like that is with scenes where you have more actors, it means it takes an incredible amount of time to do.

MM: I was blown away when I came to set and saw these guys going at it. There’s always a kind of—not to sound corny—but a magic when you see it come to life from the page, and all the pieces in place with the actors and the director and the crew. And the location itself is stunning. It’s basically like a character from the story, and watching these guys get this thing together and watch the shots from the helmet cams was, I’m not gonna lie, a little breathtaking. 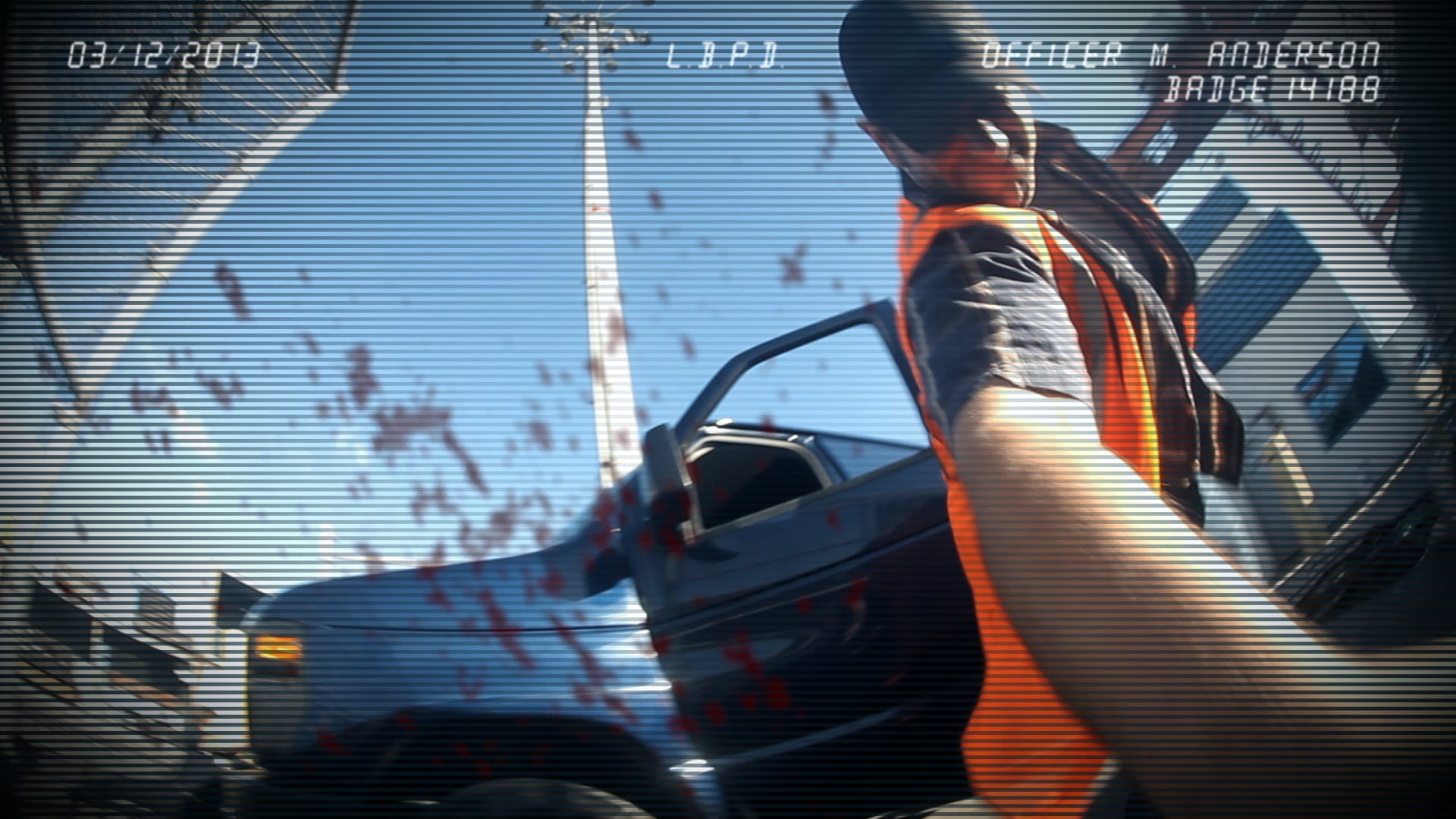