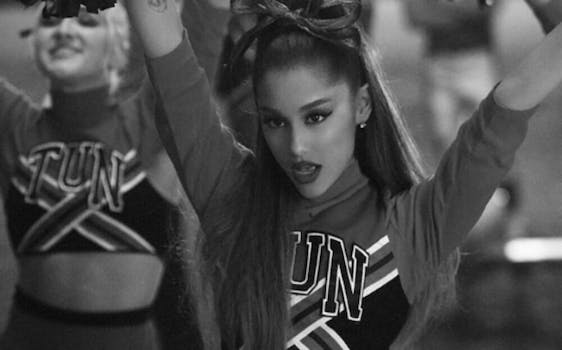 Ariana Grande’s ‘Thank U, Next’ is giving us serious teen movie nostalgia

The singer takes over our feeds.

Just when we thought that “Thank U, Next” was the best thing Ariana Grande’s done, she started sharing clips from her new music video for the song.

It appears the new project will be recreating some of the best iconic teen movies from the early 2000s. We’re talking Legally Blonde, Bring It On, and 13 going on 30. And she teased that there are more to come on her Insta story this week.

So how did Ari take on the role of Elle Woods, the aspiring lawyer set to prove that she can have beauty and brains?

new best friend …. thank u, next

Even her dog Toulouse is getting in on the Legally Blonde action, playing wood’s chihuahua Bruiser Woods.

She even found an old orange Mac computer just like Woods had in the movie.

“Whoever said orange was the new pink was seriously disturbed,” she captioned the shot of herself.

‘whoever said orange was the new pink was seriously disturbed’

Now is it getting cold in here or is it just her Bring It On remake pictures?

Dressed as one of the Toros from the movie, she captioned one pic “‪I transferred from Los Angeles, your school has no gymnastics team this is a resort. Ok, I’ve never cheered before so what?”

And like all of her others, added a “#thankunext” for good measure.

‪‘i transferred from los angeles, your school has no gymnastics team this issaalast resort …….. ok i’ve never cheered before so what?’‬ #thankunext

She shared a shot of the Clovers as well. Recognize some of the cheerleaders?

Two are the dancers from the “Thank U, Next” performance on The Ellen Degeneres Show.

And we’re not the only ones who are excited. Stars from the original movie are freaking out too.

And while we haven’t seen too much from her 13 going on 30 bit, she did hint that the movie would definitely be making an appearance.

One thing is for sure: Grande is not only portraying a strong female character in her video but also in real life.

Ellen drooling today over famous men's bodies on #InternationalMensDay2018.
Yet I've been abused all day for complimenting @hollywills on her legs.
The hypocrisy of modern feminism laid bare..
My column: https://t.co/51EV8fbBvV https://t.co/myUb83jV9C

Hey @LittleMix – when are you going to admit you stole this idea from @dixiechicks? pic.twitter.com/dLRX2TMv2k

And Ariana Grande’s mom Joan decided to hit back.

“Honestly what is wrong with you @piersmorgan?” she tweeted. “Didn’t your mother ever teach you, if you have nothing nice to say, don’t say it! You came for @TheEllenShow yesterday which was disgraceful, she is an angel. @LittleMix today, did you ever hear of paying homage? And..well never mind.”

Honestly what is wrong with you @piersmorgan ? Didn’t your mother ever teach you, if you have nothing nice to say, don’t say it! You came for @TheEllenShow yesterday which was disgraceful, she is an angel. @LittleMix today, did you ever hear of paying homage? And..well never mind https://t.co/5WBOlL8t6O

Hi Joan, my mother taught me to speak my mind & never be afraid to express honestly held opinion.
Ellen's a hypocrite – and as for Little Mix, I'd just prefer they use their talent to sell records rather than their nudity.
As your own daughter does…! https://t.co/nCQAsIgoVG

Grande clapped back and it was harsh.

The Twitter-verse was here for it.

I give thanks for Ariane Grande and her mom putting manners on piers Morgan. #ThanksgivingEve

I don't know much about Ariane Grande but if she keeps jibbing the charlatan and vulgarian that is Piers Morgan, I'm going to start buying her records. (My usual tastes are the Fall, the Clash and the Jam.) https://t.co/fWmzxJG4G7