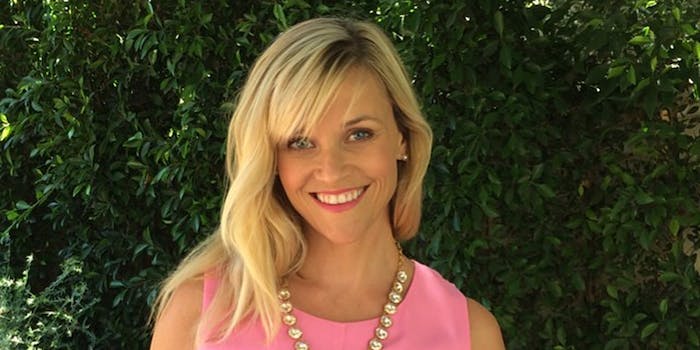 She made the video after receiving the message from his mom.

Elle Woods put the pink back on to cheer up one of her younger fans.

Actress Reese Witherspoon recently received an email from a mom whose 4-year-old son Will was undergoing a battle with cancer in the Midwest. Will’s currently in the hospital, and one of the only things that will constantly cheer him up is when Legally Blonde, one of Witherspoon’s biggest movies, appears on TV (sometimes up to four times a day).

“When he feels good enough to want something, he wants Legos and ‘The Pink Girl,’” Will’s mom wrote. “He finds comfort in it and loves the Pink Lady.”

She asked for the message to be forwarded to Witherspoon and, if she was willing, for her to take a picture with a sign that said “TeamWill,” to cheer him up (as well as herself). Eventually, Witherspoon received the message and not only gave him a photo, she made a video as well.

“My name is Reese and I’m the Pink Lady,” she said. “I heard from a few people out there that you’re a big fan of my movie, Legally Blonde. And I just wanted to let you know that me and Bruiser said hi.”

On Instagram, she posted a longer message for Will and his mom.

“I wanted you to know that I made this sign in your honor—and I’m sending a big big hug and my hope and prayers,” she wrote. “Just know—I’m a really big fan of YOURS!”

Will’s got a powerful fan in his court.