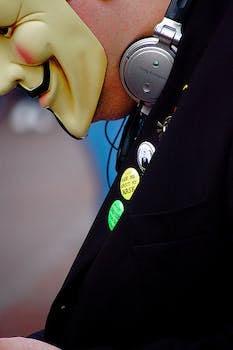 AnonTune will be much more than a music sharing site

An interview with a presumed creator of Anonymous's new music-sharing site reveals plans to rebuild the music industry and more.

To have no errors
Would be life without meaning
No struggle, no joy

With EtherSec and OpEpoch, Anonymous sought to remake religion. With AnonPlus, it aims to rule the social Web. And with AnonTune, it is hoping to take over where Napster, Tomahawk, and YouTube leave off, making the music online easily searchable and playable by anyone, anywhere, whether the music companies like it or not.

Provided, of course, you let them run just a little bit of code on your computer. Oh, and pick a username and register. And let them track you with Google Analytics. Hey, it’s Anonymous: what could possibly go wrong?

Well, for starters they’ve gotten someone annoyed enough to DDOS (distributed denial-of-service attack) them within a few days of their public launch, according to the person answering the site’s official email, who declined to be identified. But, as with most internet drama, the attack was all over quickly enough, and the site seems to have stabilized.

It’s easy enough to use, and they’ve handily provided demos (take your pick: classical, pop, or top 100—which oddly enough looks like Oldies for Lefties).

The admin walked us through the procedure for creating a playlist step by step, and it’s nothing a typical Facebook user couldn’t handle. You create a login and register, then search for the songs you want by artist or song title. You can create any number of different playlists. There’s also a function to upload your iPod songs, which might just cross some of those copyright lines AnonTune didn’t want to get into.

Although he admitted that it’s essential for the social aspect of the site, our source himself disparaged user registration, saying:

“We can’t exactly call our website AnonTune without providing the users a part in the Anonymous collective. It is also my personal philosophy that registration sucks. It takes too much time, you give away too much personal information, it’s a pain in the butt and I’m sure I’m not the only one on the team who thinks this. Registration is a restriction and it inhibits openness of our network and music. I should also clarify that the crude player/user page won’t be the only way Anontune will provide access to music in the future. Indeed, it’s important for the social-side that we are building but there is much more potential than just through the user page.”

The software searches the entire Internet (not just the Web: torrents, FTP, peer-to-peer networks and more that Google doesn’t reach) to find shared music files that fit the descriptions you’ve provided. The site itself doesn’t host the files, it just finds them and serves them up in a little window.

When Geek.com called the developers out on the security risks, they responded by posting a point-by-point refutation in Pastebin, in classic Anon style. Essentially, Anonymous argues that there would be no point in injuring the users, at least not to the point where they become useless. But as Google, Facebook, and many other for-profit sites could tell you, users will take significant hits to their privacy and security before becoming useless to you (ie leaving).

Even so, downloading software of unknown origin is always a risk; the risk is, however, open sourced. If you have the skills, you can analyze the risk for yourself. If you’re so inclined, you can publicize your analysis and gain the thanks of a grateful (and non-code-savvy) public. If you’re truly security-conscious, you can use virtual machine software to isolate that part of your computer running AnonTune and quarantine it from the rest of your hard drive. But if you were that techie, you’d probably just read the code in the first place.

The larger, more sinister, risk is that if AnonTune can see into IRCs, FTPs, P2P networks and everything else on the internet in its quest for music, then there is no corner of the digital realm which is safe from its eyes, provided it has enough users sending it on enough missions to enough nooks and crannies of cyberia.

If it’s only looking for a heavy metal Rickroll, fine. But a tool that powerful would be any spy service’s holy grail, and would, if hacked or used nefariously, be almost unnoticeable as it went about mapping everything of interest to its masters, just as long as it continued to serve up Miley Cyrus or Gwar as requested by the unsuspecting users.

In the meantime, Anonymous is hoping because it doesn’t host any music, it will avoid the fate of previous music sharing sites. “Technically, users aren’t collecting music nor are they downloading it. It is just text, remember that,” said our source, who went on to outline the way in which it is different from current, Web-only search engines.

“The music engine has the potential to access content across the internet in real-time on the client-side and not just the Web (which is a small part of the Internet.) This makes it vastly different to current proposals, especially considering these capabilities have traditionally only been a part of desktop applications.”

The new site is obviously bound to be attacked by the music industry, but our source cautions us not to vilify the Recording Industry Association of America (RIAA), digital music sharing’s greatest foe.

“Let’s also not paint the RIAA as the bad guy here. It’s true we don’t agree with their business model but we’re still willing to strike a balance between open music and profit for artists and content providers.”

So, does this mean a tip jar for musicians? What kind of balance are we talking about?

“Use your common sense,” was the reply.

The Pastebin document hinted at t-shirt marketing and advertising, and ultimately concluded, “Anontune is about the music, not the money. Play to the last note and leave no regrets.”

But AnonTune may be looking to do more to provide a sustainable model for musicians. A White Paper the site released provided a detailed, and ambitious, plan for compensation at some point in the future. “…if all songs were easily accessible and centralized on one user-friendly platform … it would become insanely popular. More popular than perhaps YouTube or even Facebook (if done right), and musical consumption would become centralized. Then it will be possible to monetize this consumption.”

Is the plan, then, to put the other middlemen out of business and create a profit-driven, legal music sharing site? Oh, it’s so much more.

Vague but ambitious plans for the future? Oh yes, they can haz. Our source explained:

“The music engine is only a part of the project. This is a hugely ambitious project with several goals and what you mentioned is just one of them. I would hate for people to assume that is the extent of the project. That would be to deny our vision.”

This, from a bunch of guys who are alternately DDOSing the CIA, struggling to keep their own site up, and running from arrest.

Who is really behind AnonTune?

Given the challenges, the ambitious goals, and the protean nature of Anonymous, where will AnonTune be in five years?

“It will be a cross between Facebook, Limewire, Google, iTunes music store, Anon messaging, and academic music research all with a new twist.”

That’s assuming it makes it through the next six months.