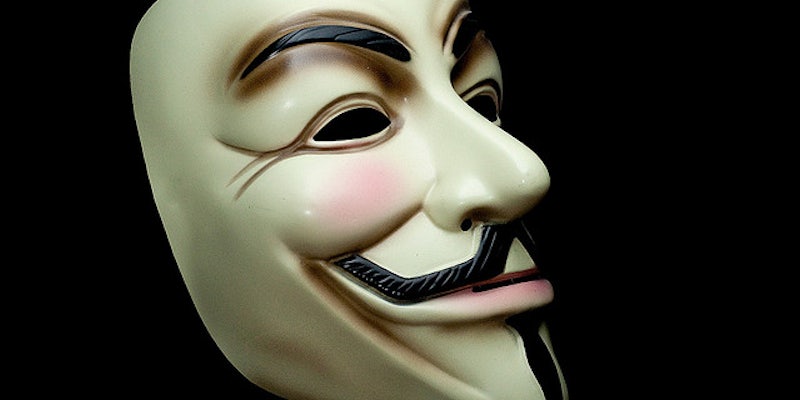 Over the past few days a series of mysterious manifestos have gone up at Pastebin, the hacker collective’s favorite place to post pronouncements. A tight circle of Anonymous supporters on Twitter then publicized these missives with the unedifying hashtags #EtherSec and #OpEpoch. So what’s it all about?

“Writing for a penny a word is ridiculous. If a man really wants to make a million dollars, the best way would be to start his own religion,” said science-fiction author turned Scientology founder L. Ron Hubbard. People laughed at him at first, but just look how successful he was.

Anonymous is no stranger to Scientology: The hacker movement leapt to worldwide fame after staging in-person protests of Scientology outposts in 2008. It would be just like Anonymous to model a prank on their archenemies’ greatest success.

The manifestos and hundreds of follow-up tweets suggest that either Anonymous has developed a new and compelling Metaphysics of Revolution at exactly the same time as Julian Assange coincidentally got into the sherry and started drunk tweeting. Or possibly—just possibly—someone here is pulling our leg.

We reached an established Anon with experience in many operations who read over the documents and characterized them as such:

“It’s like some shaman ate a bunch of acid and waxed poetic about protesting. Those pastebins could have just said ‘WAKE UP SHEEPLE!’ and it would have had the same message.”

The first document to make a splash came on December 28.  It provided a generalized introduction to EtherSec in heightened, cryptic language (the header, for instance, says “Esthersec” in ASCII text, although if there’s any relationship to the late Jewish queen, it’s yet another mystery).

The document uses “Matrix”-like language to call hackers to some unspecified action:

“You have been led to believe that what you are now is the sum of all parts. That you are a product of your environment. That you are unable to expand past the limits imposed upon you by the System. This is a lie.”

But the author or authors don’t explain much in detail. The posting goes on to say that everyone is an agent of change, and that EtherSec is a collective of specially gifted people whose talents “allow us to perceive the reality outside of the matrix.”

If you remember your Matrix trilogy, effectively it says everyone is Neo. There is just enough unspecific appeal to the spirit and promise of action to pique interest.

The manifesto goes on to outline a word salad of spiritualism, quantum physics, and nerdery that will surely tug at the heartstrings of any Westerner who feels there’s something wrong with the world and yearns for a spiritual alternative, but who cannot tolerate organized religion. That’s a pretty sizable number of people.

They also uploaded a video to YouTube which likens the proposed revolution to a giant chess game in which there are no pawns or kings and Occupy movement members are knights.  EtherSec members are the bishops, spiritually guiding the gamers. The collective is the Queen:

“We cannot be checkmated, because we have no King. We will not fall to the dooms of tyranny because we do not believe in Pawns.”

The video defines OpEpoch as short for “Operation Evolving People Over Current Hostilities.”

The second significant document, which went up last night, focuses on OpEpoch, repeating the chess imagery in the YouTube video and adding political and philosophical detail. They clarify that they are not socialists, although they admire socialism; they are collectivists, a radical new political philosophy which is resistant to tyranny without being oppositional.

And then there were the tweets: 1,500 tweets over the past 48 hours with the hashtag #EtherSec. TwitCircle reveals that the majority of the conversation about #EtherSec and #OpEpoch was, at least initially, contained within a relatively small circle of Anonymous supporters who retweeted one another to maximize the reach of the message.

Given that Twitter sees more than 250 million tweets a day, it’s not clear they had any real success, but the TwitCircle statistics suggest they were trying very hard. So far, it hasn’t been picked up by the general public.

It’s Anonymous, so it’s never wise to rule out the possibility they’re doing it for the lulz—yanking the chain of the whole Internet, just for laughs.

If that’s the goal, now they just have to get someone actually laughing.

Photo by by Ben Fredericson (xjrlokix)