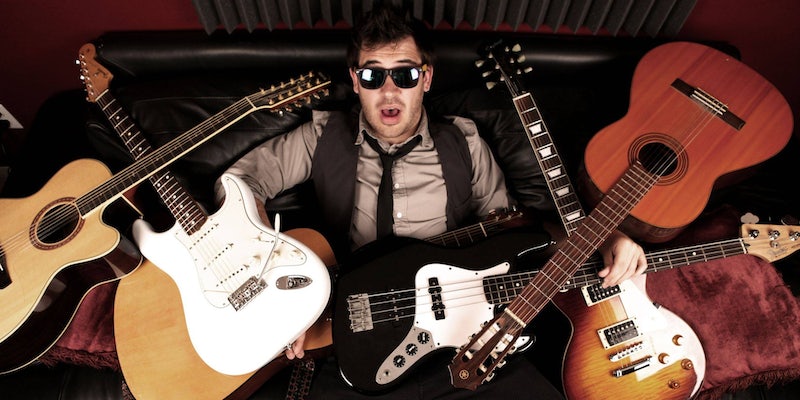 Meet Andy Lange, the producer behind some of YouTube’s greatest hits

Here's the unlikely story of a career on a cruise ship turning into a chance at the YouTube limelight.

Another 12 hours have slipped by without Andy Lange taking notice. Secluded in his basement-turned-music studio, Lange’s forgotten to eat—again. With his cat Steve cozied up on his lap, Lange spins around in his chair as he burns his latest musical track to a CD before heading out to check the levels on the sound system of his 2003 Buick Century.

Lange’s basement studio is the perfect balance of function and personality, with hundreds of Star Wars toys and posters of Lange’s favorite movies interspersed among the instruments, sagging leather couch, recording equipment, and giant computer monitor that take up the majority of his space. It’s not unusual for Lange to lose hours down in the basement of the three-story condo he shares with friends, because to him, music is everything.

Lange has become known on YouTube for his Beach Boys-meet-the-blues musical style and producing viral hits such as “Nice Guys” with Ryan Higa and Chester See. Since joining YouTube in 2009, Lange has grown to become the go-to producer for such major creators as See, Higa, Andrew Garcia, and Josh Golden. When not creating content for YouTube, Lange mixes audio for popular television shows such as FXX’s Legit; he’s even been nominated for an Emmy for his work on Librarian 3: Curse of the Judas Chalice.*

“It’s so funny because people are still under the impression that you need a record deal. There are all these tools now that let you just do everything yourself,” Lange explains while trying to stop his cat from running across the piano.”It’s just so amazing to have all these tools at your fingertips and just be able to do stuff on your terms and not have to sign away ownership to your bread and butter. These songs are my life; they are everything to me, and I don’t want to sign away portions of those just to get some deals.”

With a mother and grandmother who were both singers, Lange was born to be a musician. While he was always involved in music growing up, it wasn’t until high school that he found his niche performing with his school’s top choir. Upon attending Michigan State, Lange began studying computer engineering before switching into the much more agreeable audio mixing major.

“I asked my professor at the end of my college career—I was just like, ‘So what should I do now?’ He’s like, ‘You should go to Los Angeles and meet one of my first students and see if he can give you an internship,” Lange laughs. “There weren’t a lot of jobs, so I took a not-so-great job just so I could stay in the city. I was getting kind of bummed out, but then a buddy from college who I sang with in my a cappella group called me up and was like, ‘Do you want to sing on a cruise ship?’”

Sailing the high seas of the world, Lange produced what would become his first demo album and was subsequently introduced to Chester See. Lange’s friendship with See led him to produce the viral video “Nice Guys,” which pushed See himself, Ryan Higa, and KevJumba into the YouTube limelight. And while Lange’s YouTube page continues to grow in subscribers and viewers, his work as a producer continues to go unknown on the platform. His only regret? Not getting into the YouTube game sooner.

“I wish I had gotten into it earlier and embraced it earlier, but as far as the path I took, it’s been amazing being able to work with these guys and some of these big YouTubers. I’ve been able to help them create funny songs and stuff like that. As much as I love producing stuff, I do miss doing the artist thing sometimes,” says Lange.

Lange’s career as a musician only continues to gather steam as he works on his next album, focuses on bolstering his YouTube channel, and produces See’s debut album. Lange has filled his channel with beautiful and unique covers featuring the talents of See, Andrew Garcia, and Josh Golden. And despite his constant juggling of audio mixing and music, Lange believes his life would be too boring if he had to give one up.

For those looking to launch their own YouTube channels, Lange has some advice: “It’s all about just creating quality content that people will pass around. It’s a crowded space now if you’re just starting out so you can easily be discouraged but as long as you make things that really show your personality, as long as they’re the things you really believe in and will have others connect to it, that’s what’s most important, I think.”

*Correction: An earlier version of this article misstated the work for which Lange won an Emmy. The correct title is Librarian 3: Curse of the Judas Chalice.