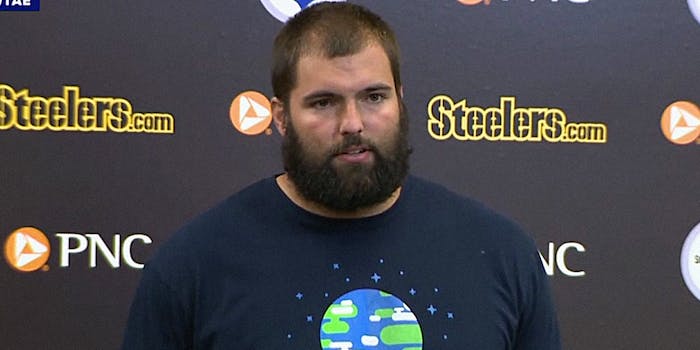 Some conservatives are comparing Alejandro Villanueva's apology to a hostage video.

Lineman Alejandro Villanueva was praised by many right-wing Americans after he was the only Pittsburg Steelers player to stand for the national anthem during Sunday’s game against the Chicago Bears. But Villanueva has since stepped back, apologizing for his actions.

On Monday, Villanueva said during a press conference that he “made a mistake” by standing during “The Star-Spangled Banner.”

Steelers player Alejandro Villanueva says he 'made a mistake' standing for national anthem without his team. https://t.co/n1JGNtk4dx pic.twitter.com/ILEZ7dSB4O

Villanueva said that the Steelers originally planned to remain in the locker room together during the national anthem as a team, but the lineman asked quarterback Ben Roethlisberger if he could walk into the tunnel leading to the field for a vantage point to watch the national anthem. This is because Villanueva was dealing with a “tough moral dilemma” as a former Army ranger who feels an intense dedication to the military. He claims that the Steelers’ plan was “butchered,” in part because of a lack of communication that led to Villanueva looking on as the national anthem played while the rest of his team remained off the field.

“Unfortunately, I threw my teammates under the bus, unintentionally,” Villanueva said. “Every single time I see that picture of me standing by myself, I feel embarrassed.”

Of course, much of alt-right Twitter was upset. Some users even suggested Villanueva was forced into apologizing, comparing the press conference to North Korea’s authoritarian government and ISIS hostage videos.

The Steelers army vet Villanueva apologized in what looks like a painfully forced hostage video for standing for the national anthem. pic.twitter.com/3LMJJROTvj

Progressives break people. They are fanatics and zealots. Monsters, perhaps.

Meanwhile, others are happy to see Villanueva apologize, insisting that he’s making the right choice to speak up and stand with his team.

NFL players aren’t protesting the flag or the military. Al Villanueva knows this — and he said it. That’s important. https://t.co/nPoQUoFJAp

He’s stepping back cause he hurt his team and he has honor. Social media and regular media has blown what he did out of proportion.

Then there is the all-important question of what the alt-right will do now with all those newly purchased Villanueva jerseys.