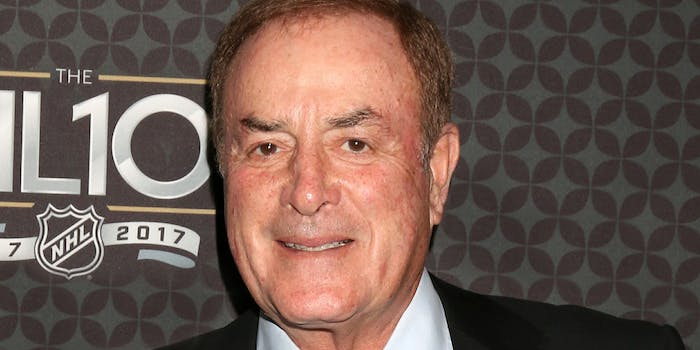 Al Michaels is one of the greatest play-by-play announcers in sports history. But just because his call of the 1980 Olympic gold-medal game for the U.S. hockey team is one of the most iconic ever, that doesn’t mean the broadcasting veteran still isn’t capable of making a horrible joke on air.

Because that’s what he did Sunday night while covering the Giants-Broncos contest. And it’s a doozy. Listen below.

“Let’s face it, the Giants are coming off of a worse week than Harvey Weinstein, and they’re up by 14 points,” Michaels said.

As James Corden learned this weekend, Harvey Weinstein jokes aren’t playing well these days, especially since the allegations against the film producer have inspired waves of women to talk about their own experiences with sexual harassment and assault.

While true that the Giants have had a terrible season leading up to their 23-10 win vs. Denver, it is of course not comparable to the Weinstein controversy. At all. And many on Twitter were quick to remind.

al michaels is gonna want that one back, good god.

Al Michaels: “The Giants had a worse week than Harvey Weinstein”
Must be funny UNLESS YOU HAVE ACTUALLY BEEN A VICTIM OF ASSAULT. @SNFonNBC

Al Michaels is probably the best play-by-play guy in history. But boy… that was a big, big lapse in judgment.

Al Michaels: "The Giants are having a worse week than Harvey Weinstein" pic.twitter.com/R76VJEquCk

Later in the broadcast, Michaels attempted an apology (though he didn’t mention Weinstein by name this time).

“Sorry I made a reference earlier before. I tried to be a little flip about somebody obviously very much in the news all over the country,” Michaels said. “It was not meant in that manner. So, my apologies. And we’ll just leave it at that.”

It’s a pretty weak apology, actually. Perhaps the 72-year-old Michaels can learn something from Corden.

To be clear, sexual assault is no laughing matter. I was not trying to make light of Harvey’s inexcusable behavior, (1/2)

but to shame him, the abuser, not his victims. I am truly sorry for anyone offended, that was never my intention. (2/2)

Or people can finally recognize that it’s never cool to “joke” about sexual assault. Let’s go with that.