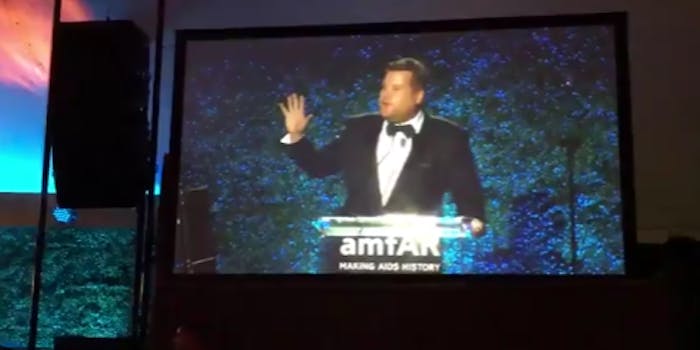 Late night host James Corden tried out some new Harvey Weinstein jokes on Friday night, and they didn’t exactly go over well, particularly with actress Rose McGowan, recently one of the most high-profile critics of sexual assault culture in Hollywood. While serving as the host of the annual AmfAR Gala on Friday night, Corden didn’t wait long before sliding in his first reference to the now-disgraced film producer.

“The night here in L.A. is so beautiful, Harvey Weinstein has already asked tonight up to his hotel to give him a massage,” Corden joked. The line drew a decidedly mixed response from the assembled crowd, leading The Late Late Show host to add, “If you don’t like that joke, you should probably leave now.”

McGowan was not thrilled with Corden’s jokes. She reportedly reached a settlement over a sexual assault allegation against Weinstein in 1997, and in a recent tweet directed at Amazon CEO Jeff Bezos, she claimed she was raped by Weinstein. She responded to Corden on Twitter as follows:

1) James Corden is a close friend of HW’s

2) Hearing the audience’s vile roars & laughs show EXACTLY what kind of HOLLYWOOD you really are. https://t.co/HBqNxnpr7N

Corden, 39, has not yet offered any public response to McGowan’s statements, whether her criticisms of the people who did laugh at his jokes or her characterization of him as a “close friend of HW’s.” For the record, AmfAR is an international organization dedicated to combating AIDS, and it is, thus, not the sort of place one would normally expect to hear overly glib jokes about the actions of an alleged sexual predator.