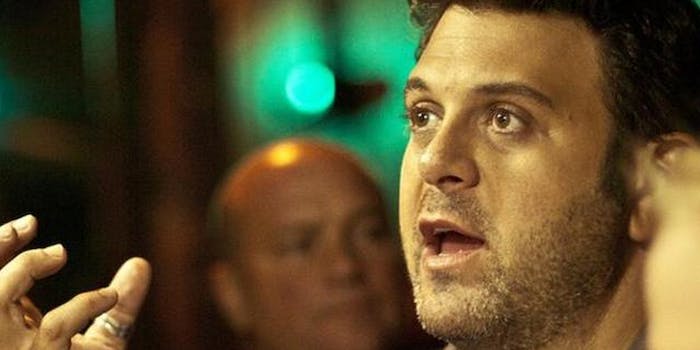 The pile-up of Internet comments can be overwhelming for anyone, but Richman is also a public figure.

If you’ve ever watched the Travel Channel show Man v. Food, you might have been worried about host Adam Richman. The show is basically an episodic eating contest at different restaurants around the world, featuring ridiculous amounts of greasy food, and Richman was the taste-tester.

His new show, Man Finds Food, was supposed to debut on July 2, but the Travel Channel pulled it indefinitely. Richman recently lost a good deal of weight and has been documenting it on Instagram. He posted a photo last month (which has since been deleted) with the caption:

“Had ordered this suit from a Saville Row tailor over a year ago. Think I’m gonna need to take it in a little…. #Victory #EyesOnThePrize #AnythingIsPossible #fitness #transformation #thinspiration”

That last hashtag was a trigger for some people. Thinspiration (or “thinspo”) is a term often used in pro-bulimia and pro-anorexia circles, and if you search the term on Instagram, several accounts with troubling images come up, though Instagram did attempt to take measures against the promotion of self-harm. Richman might not have known about the connotations of this term, but he nevertheless received several comments that attempted to educate him. He did not take it well.

In a post for xoJane, one woman recounted her interaction with Richman. She asked her followers to let him know eating disorders aren’t a joke or a hashtag. This apparently led to Richman dropping the word “cunt” in a response to her, and telling another user to “grab a razor blade & draw a bath. I doubt anyone will miss you.” To another, he offered the succinct “DILLIGAF?” (Do I look like I give a fuck?).

The pile-up of Internet comments can be overwhelming for anyone, but Richman is also a public figure that could use this weight loss to potentially help others. He apologized with a now-deleted tweet on June 20, stating, “Yes. I’ve responded to internet hate recently with vile words directed at those hating me. I am sorry, I should know better & will do better.”

This morning, he released a statement to Good Morning America:

“I’ve long struggled with my body image and have worked very hard to achieve a healthy weight. I’m incredibly sorry to everyone I’ve hurt.”