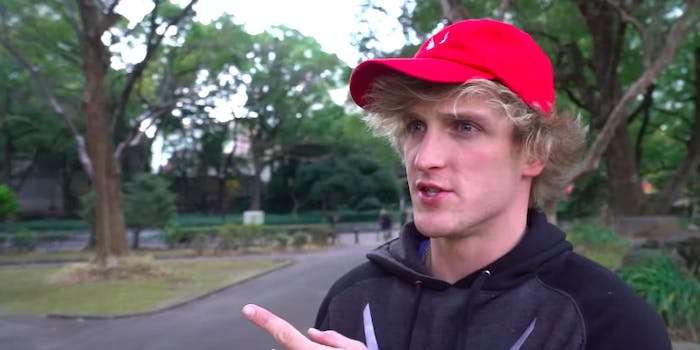 Several celebrities chimed in to bash the YouTube star for his recent video.

YouTuber Logan Paul incurred the wrath of several celebrities on Twitter after uploading a video of a dead body he found while visiting Japan’s “suicide forest.”

Among his loudest critics was Breaking Bad actor Aaron Paul, who tweeted his condemnation of the YouTube star’s actions late Sunday. “How dare you! You disgust me,” he wrote. “I can’t believe that so many young people look up to you. So sad. Hopefully this latest video woke them up. You are pure trash. Plain and simple. Suicide is not a joke. Go rot in hell.”

The backlash against Paul has been swift and unrelenting, with many calling for YouTube to remove his channel, which boasts more than 15 million subscribers. Paul posted an apology last night, insisting that he “didn’t do it for views,” but rather had “intended to raise awareness for suicide and suicide prevention”—by uploading a video of a dead body hanging from a tree and laughing about it with his friends.

Even if Paul’s apology is sincere, the fact that he failed to consider the insensitivity of his video at any point before posting it is alarming. Paul has millions of young, impressionable followers (whom he refers to as the #LoGang), and if can’t exercise a modicum of common sense and human decency while posting, perhaps he should relinquish his platform altogether.