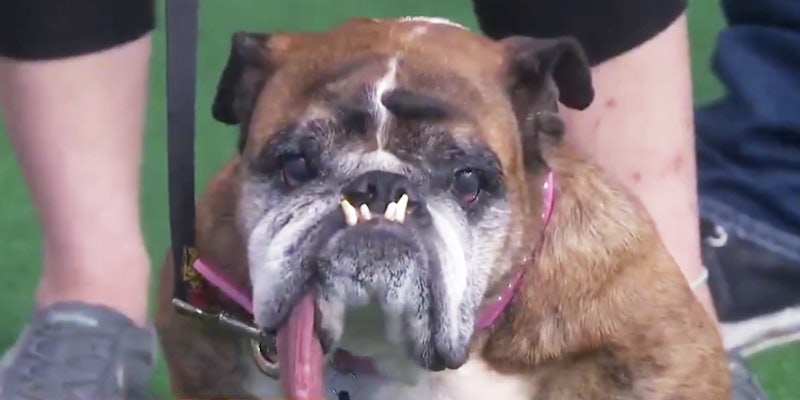 The internet is in love with Zsa Zsa, the world’s ugliest dog

Meet the 9-year-old English bulldog rescued from a puppy mill.

Her nose is scrunched into her face almost like a button on a tufted sofa. Her severe underbite pushes her bottom teeth up like dilapidated fence posts, while her long tongue lolls out to the side, nearly touching the ground. An ever-present string of drool hangs from her chops. Her stature is something like a cross between a gargoyle and an ottoman.

She seems like an evolutionary anomaly in every sense of the word—or, at the very least, a cruel joke of nature: Meet Zsa Zsa, a nine-year-old English bulldog who was just crowned the “world’s ugliest dog.”

Meet Zsa Zsa and owner Megan Brainard! Her tongue almost drags on the floor when he walks. It’s real! She got a manicure just for this occasion. #WorldsUgliestDog #SonomaMarinFair pic.twitter.com/G6FwHTbjq3

Zsa Zsa—named for actress Zsa Zsa Gabor, who passed away in 2016 and who almost certainly would have been honored at the namesake—took home the prize at the annually held contest in Petaluma, California, over the weekend.

Zsa Zsa’s owner, Megan Brainard, traveled 30 hours, all the way from Minnesota, to compete in the contest. And it ended up being worth it after her pup beat out 13 other ugly doggos to win the grand prize of $1,500 as well as a special trophy.

Brainard and her family appeared on the Today show Monday morning with their prize show dog, who they adopted from PetFinder.com after she was rescued from a puppy mill.

“I was in shock, even though I knew she was definitely, definitely up for the winnings, it was still—I don’t believe it,” Brainard admitted to Hoda Kotb when asked for her initial reaction to winning.

It should come as little surprise that since having been crowned, Zsa Zsa has become a darling of the internet, which loves a good literal underdog story.

Fake news. There are no ugly dogs. https://t.co/HUsME7bSBH

RT if you think Zsa Zsa is beautiful https://t.co/rajuKTH9qw

Zsa Zsa I would die for you honey https://t.co/KJdqRA5Trh

Even the discerning minds of Queer Eye showed Zsa Zsa some love: